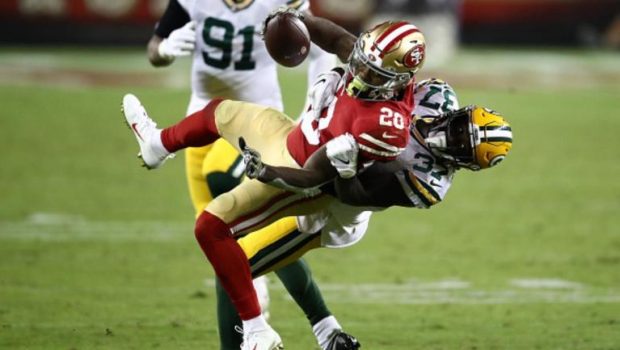 PACK CRUSHED THE NINERS, BUT THIS TD PUSHED PAST 48 OVER!

With 6:15 remaining in the fourth quarter, fans that picked the under points total in the Packers’ road game with the 49ers were probably feeling good.

The Over was 48.5 points, according to William Hill Sportsbook.

The Packers led 34-3 after Green Bay kicker Mason Crosby drilled a 53-yard field goal. Down 31, it seemed unlikely the Packers would leave their starters in on their next offensive possession and San Francisco had been stonewalled on offense all game.

Then, the 49ers’ offense, after not generating a scoring drive since their second possession of the game, came to life and finished the game with consecutive scoring drives. After Richie James made it 34-10 on a 41-yard touchdown catch, Jerick McKinnon one-yard score with four seconds left put the game total to 51 points, as the Packers left town with a 34-17 victory.

Under bettors you may want to look away… this Jerick McKinnon touchdown with just 4 seconds left pushes the game over the 48 point total, delivering one of worst beats of the season ?