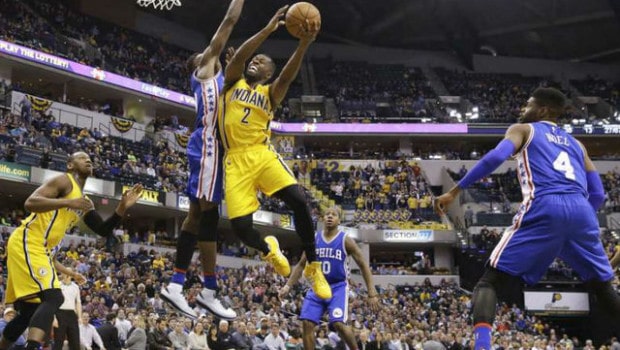 In front of one of the smallest crowds at Bankers Life Fieldhouse this season and with the energy and passion lacking, Paul George finished with 15 points and six rebounds and Monta Ellis added 13 points to help Indiana coast past the Sixers 91-75.

They never allowed the 76ers to take the lead, never permitted them to tie it after the first 3 1/2 minutes and only allowed Philly to make it a one-possession game once over the final 42 1/2 minutes. It was good enough to snap a two-game losing streak and set up a 12-game final run that includes one of the friendliest schedules in the East.

Philly, which has lost six straight and 19 of 20, hung around for three quarters but couldn’t come completely back from a 9-0 first-quarter run that left it in a 21-10 deficit.

But the Pacers answered with eight straight and pulled away in the fourth.

”We have played four games in five nights, you come into it without Jahlil (Okafor) but the (Robert) Covington, Richaun (Holmes) bodies, just that energy is a trick to manage,” coach Brett Brown said. ”So we just tried to spin the group around as fresh legs on the court as much as we could. And to Indiana’s credit, they’re tough here.”