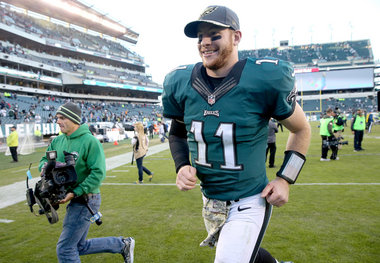 OVER/UNDER ON EAGLES’ WENTZ COMPLETIONS 23.5 — BET THE OVER!

The Eagles are favored in tonight’s hame against the Green Bay Packers at the Linc.

But here’s a side bet that you might contemplate, courtesy of ESPN.com:

With opening games against the Browns and Bears, the Eagles were in prime position to ease Wentz into action during his rookie season. Wentz completed at least 24 passes only once in his first six games but has passed the mark in three of his last four contests.

An encouraging development for Wentz is whom he’s done it against — he hit overs against the Cowboys and Giants in that span (as well as the Falcons) and finished one shy of an additional one playing at Seattle. He’s trending in a good direction for an over, and the Packers should oblige.

The Packers’ defense has allowed 92 completions since Week 8, ninth most in the NFL. In that span, Green Bay has allowed opponents to complete 73.9 percent of their passes 10 yards or fewer downfield — the majority of what the Eagles have asked of their rookie quarterback. With a secondary decimated by injuries, the Packers’ defense is susceptible.