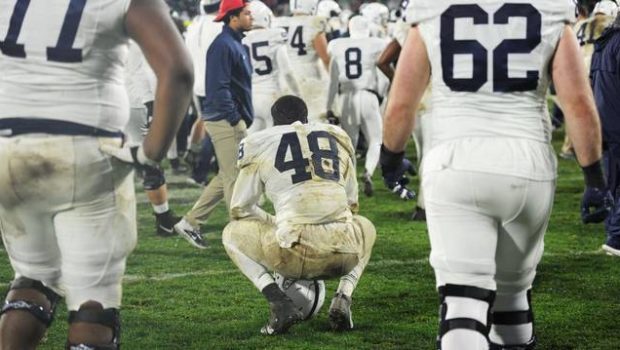 HOW DOES THE OUTBACK BOWL SOUND? THAT’S WHERE PENN STATE WILL LIKELY PLAY!

This is a story about lowered expectations.

Two weeks ago Penn State fans were realistically expecting the Nits to plat for the national championship.

Then the disaster at Ohio State happened, and yesterday’s nightmare at Michigan State.

So, instead of the College Football Playoff or the Orange Bowl, how does the sound of the Outback Bowl make you feel?

But now that No. 6 Ohio State lost to Iowa, the Buckeyes are likely out of the playoff picture, too. And with the Buckeyes’ head-to-head win over Penn State, they’ll probably be above the Nittany Lions in the bowl pecking order. Plus, Michigan State is sitting with a win over Penn State and only one conference loss.

Will Ohio State lose to Michigan? Will Michigan State represent the Big Ten East in the Big Ten title game? What happens to currently unbeaten Wisconsin? Where does Michigan fit in?

But Penn State making the Cotton Bowl or Fiesta Bowl as an at-large pick or the Citrus Bowl with that Big Ten tie-in at 10-2 isn’t out of the question.

Penn State fans remember Matt McGloin and his five interceptions in Tampa’s Outback Bowl back in 2011.

The Nittany Lions would face an SEC opponent. The way it’s looking right now, that’d be either Auburn, LSU, Mississippi State or even South Carolina or Kentucky. Outside of Georgia and Alabama, the SEC is wide-open.