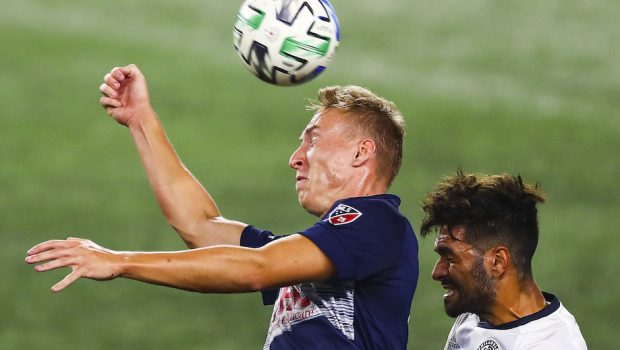 OUT OF THE BUBBLE, UNION AND REVOLUTION BOUNCE TO A DRAW

The Union played their first game out of the bubble last night, and the result was a tie.

Philly and the New England Revolution played to a 0-0 draw in Foxboro, Mass.

Both teams were back in action for the first time on the resumption of the MLS regular season.

New England nearly won the match late in the contest. However, Justin Rennicks’ cross in the box to Adam Buksa was driven wide left of the goal.

With the result, meanwhile, the Union extended their unbeaten stretch over New England to 5-0-2. That includes the Union’s 1-0 victory over the Revs during the knockout round of the recent “MLS is Back Tournament.” That result, though, does not count toward the regular-season league standings.

The Revolution put the heat on Union keeper Andre Blake early. In the ninth minute, a splendid side strike by Gustavo Bou was saved by a sprawling Blake. Three minutes later, it looked as if New England’s Cristian Penilla was about to beat Blake, but Union defender Mark McKenzie managed to get a foot on the ball to deflect it away.

In the 13th minute, Buksa hit the right post with his chance.

The Union’s best opportunity to score in the first half came via Kacper Przybylko on 36 minutes. However, his shot from roughly 12 feet was pushed wide by New England goalkeeper Matt Turner.

In the second half, it looked as if Philly was poised to break the scoreless stalemate in the 54th minute. After some nifty footwork, Brenden Aaronson put himself in position to beat Turner, but the Revs keeper got just enough on the ball to keep it from getting past him.

Blake was also solid in the second half, especially on Tajon Buchanan’s chance in the 71st minute.