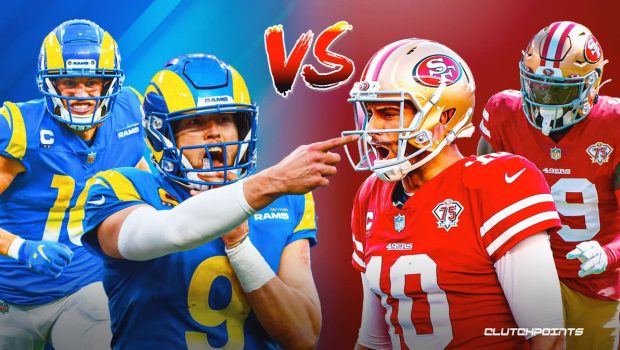 This is the third meeting between San Francisco and Los Angeles during the 2021-22 season.

As NFC West rivals, the Rams and 49ers have battled twice a year since 1950. San Francisco has won six straight against their familiar foe.

In the last meeting, San Francisco fans showed up in force at L.A.’s SoFi Stadium.

“It did catch us off guard,” Rams head coach Sean McVay said, per ESPN’s Lindsey Thiry. “…There was a lot of red there. That was definitely a surprise.”

The Rams aren’t likely to hold a significant home-field advantage in Round 3 either. Yet, Los Angeles does have the offensive and defensive firepower needed to end the 49ers’ winning streak.

The Rams feature an aggressive pass rush led by Aaron Donald and mid-season acquisition Von Miller. That will be the difference against a San Francisco team that may be without star left tackle Trent Williams. The nine-time Pro Bowler is questionable with an ankle injury—though the 49ers remain hopeful.

“He’s going to do everything he can to play and so I’ll be surprised if he doesn’t,” 49ers coach Kyle Shanahan said, per ESPN’s Nick Wagoner.

Even if Williams suits up, the Rams are likely to create chaos against San Francisco quarterback Jimmy Garoppolo. That could lead to the critical error that the 49ers cannot afford.

While Garoppolo has done enough to keep the 49ers in the Super Bowl hunt, he’s also thrown six interceptions in his last four games. The 49ers have survived those mistakes, but they’ll struggle to do so on Sunday.

In the last meeting, the 49ers surged back from a 17-3 halftime deficit. Expect Matthew Stafford, Cooper Kupp and the rest of the Rams offense to spark an early lead again. An unfortunately-timed miscue from Garoppolo will prevent San Francisco from mounting another comeback.