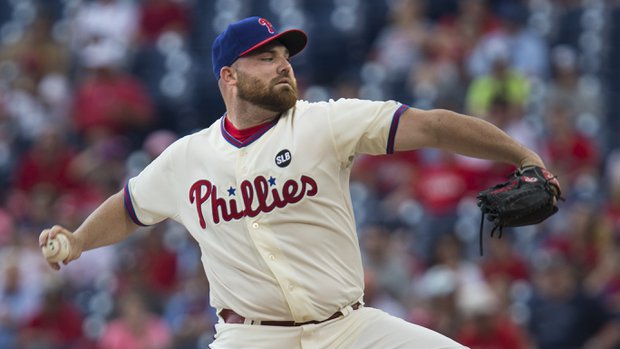 When things are going right for the Phillies even a pitcher being hit in the throat by a peg from his own catcher can’t stop them!

Sean O’Sullivan (above) won a major league game for the first time in four years, staying in after he was hit on the throat by a throw from Cameron Rupp, and the Phillies beat the Arizona Diamondbacks 6-0 for their first five-game winning streak since last summer.

“I didn’t see the ball for one second,” O’Sullivan said. “It was like I got punched in the throat from around the corner.”

He turned to talk to his fielders in the sixth with two on and a full count, then as he pivoted to face the plate was struck on the throat with a throw by Rupp. Phillies manager Ryne Sandberg came to the mound and, after a brief delay and one warmup toss, O’Sullivan retired Aaron Hill on a flyout with his next and final pitch of the day.

“That could’ve been even uglier than it was,” Sandberg said. “It wasn’t pretty when it happened, but there was a little bit of humor afterward.”

O’Sullivan had a red mark just below his Adam’s apple. He said breathing was tough for the first “five-10 seconds” after getting hit, and swallowing still was difficult after the game.

“It was scary for a minute,” he said.

Maikel Franco homered, tripled and drove in two runs for the Phillies, who had not won five in a row since July 7-11. Darin Ruf homered and Ben Revere had three hits and an RBI.

“Everybody is chipping in,” Sandberg said. “As a team, we’re playing real good baseball.”

Rupp hit a sacrifice fly in the second and Ruf homered in the fourth for a 2-0 lead. Franco drove in a run in the sixth with his first big league triple, then scored on Cesar Hernandez’s single.