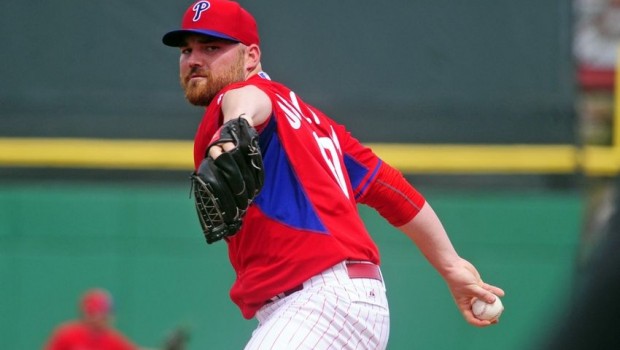 O’SULLIVAN BACK IN MIX TO BE PHILLIES’ NO. 5 STARTER

It was a short-notice start for Phillies pitcher Sean O’Sullivan, and he came up short, losing to the Blue Jays 10-6.

He said his wife read online Monday that he had been scheduled to start Tuesday’s Grapefruit League game, but nobody from the Phillies told him until Tuesday morning, about 24 hours after it had been announced in big league camp. O’Sullivan, who is the in-house favorite to be the team’s No. 5 starter, allowed five hits, four runs, four walks and two home runs with two strikeouts in four-plus innings.

“I was supposed to pitch today either way,” said O’Sullivan, who laughed off the incident. “That type of thing shouldn’t be a factor either way.”

The Phillies reassigned O’Sullivan to minor league camp earlier this month, but he has been getting stretched out to start. The fact that the Phillies optioned Miguel Alfredo Gonzalez to Triple-A on Sunday and released Kevin Slowey on Tuesday leaves O’Sullivan as the favorite to be the No. 5.

“I kind of know what we have with O’Sullivan,” Phillies manager Ryne Sandberg said after the 10-6 loss. “He’ll throw strikes for us and he’ll change speeds.”

The Phillies do not need a fifth starter until April 12, so O’Sullivan conceivably could make a start with Triple-A Lehigh Valley before joining the Phillies. The Phillies have said they are looking outside the organization for help, but Phillies general manager Ruben Amaro Jr. said the front office has not been interested in any pitchers recently released.

The team hopes Chad Billingsley, recovering from a pair of right elbow surgeries, is ready to join the rotation before the end of the month.

“To be down in Minor League camp for the last couple weeks and still have a chance to fight for the spot is unorthodox,” O’Sullivan said. “You can’t play GM. You hear guys in the locker room playing GM and this and that. That’s something that’s out of our hands. You never know what’s going on. As soon as you think you have it figured out, it’s the other way around.”

O’Sullivan allowed a two-run home run in the first inning to Edwin Encarnacion, which cleared the batter’s eye. He also allowed a solo home run to Jose Bautista to start the fifth.

“It didn’t quite go as well as I would have liked it,” O’Sullivan said. “I felt a little off on my release points. That’s mostly because I’ve only been on the mound once in the last 11 days.”

O’Sullivan lasted just one inning in his last start last week after a ball hit his pitching hand.