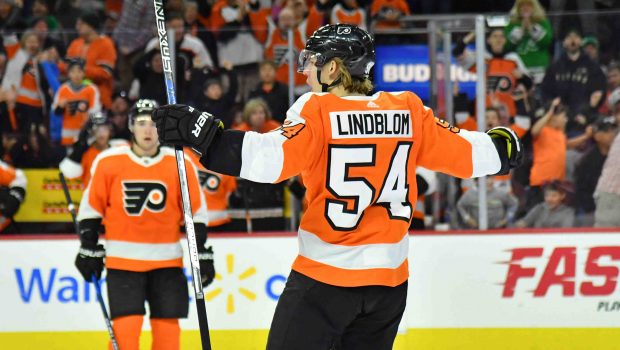 The visiting Flyers rookies cleaned up on the Isles rookies, and Oskar Lindblom had a hat trick and five points to help lead the Flyers to a 6-3 win.

“We got a chance to see different players in different situations and there’s value in that,” Flyers coach Dave Hakstol told Flyers.com. “You always want to see some good 5-on-5 play and we learned a lot about some of our young players tonight – some good and some not so good, but it was a valuable night.”

“I worked hard this summer. I got stronger and it feels good to be out there,” said Lindblom. “I feel more comfortable this year. Last year my confidence was not at the top, but I feel more relaxed this year.”

The Flyers also scored three power-play goals in the game with Morgan Frost leading the charge. He factored into all three tallies and posted a goal and two assists for a three-point night.

The Flyers used quick strikes on two separate occasions in this one. Lindblom struck immediately into the first power-play of the game, benefitting off a nifty play from Frost, who slid a pass into the slot for a deflection.

Seconds later, Twarynski gave the Flyers a 2-0 lead by breaking into the zone and ringing one off the post and past Isles goaltender Evan Buitenhuis.

Eight minutes into the second period, defenseman Philippe Myers fired shot from the point that got through and Lindblom able to get a stick on it for a deflection, which broke a 3-3 tie.

Nine seconds later, Lindblom struck again for the hat trick and fifth point of the night to regain the Flyers two-goal advantage.