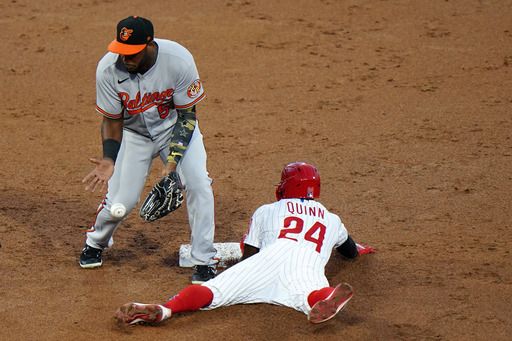 Anthony Santander, Rio Ruiz and Chance Sisco homered to lead the Baltimore Orioles to a 5-4 win over the Phillies.

Baltimore reliever Miguel Castro got out a jam in the eighth thanks to a fantastic diving stop by Ruiz at third. Castro put runners on the corners with no outs but allowed only one run on Andrew Knapp’s RBI single that cut it to 5-4. With runners on the corners, former NL MVP Andrew McCutchen (batting just .189) hit a grounder that Ruiz snagged on a diving stop and his bouncing shovel pass to second ended the rally.

The Orioles took the first two games of the series and have won four straight completed games — they are also winning a game that was suspended Sunday against Washington.

The Orioles ran through six pitchers and reliever Shawn Armstrong (2-0) got the win with 1 2/3 scoreless innings. Austin Hays led off the 10th inning with a two-run, inside-the-park homer to win Tuesday’s series opener 10-9.

Baltimore went deep the usual way on Wednesday — including Santander’s tying solo shot that skimmed the foul pole against starter Zach Eflin (0-1) in the third.

Sisco gave the Phillies a 3-2 lead in the fourth with a two-RBI double, part of a three-RBI night for the catcher, and Ruiz had a solo shot in the fifth.

Eflin struck out a career-high 10 and walked only one in six innings, continuing a recent trend of solid starts from the rotation. The Phillies have dropped four of five games.

”We’re all in good spirits,” Eflin said. ”We know what the season has done to us so far. It’s tough to get into a routine with the things we’ve been through in the most routine-oriented sport.”

The Phils bullpen — by ERA, the worst in the league – continued to struggle. Adam Morgan gave up Sisco’s solo shot on just his second pitch of the seventh inning that helped send the Orioles on their way to an impressive 6-1 road record.