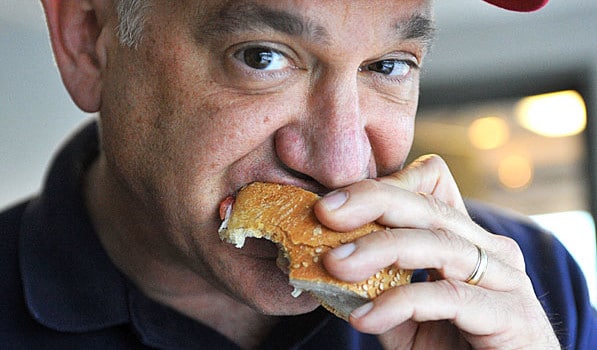 ONLY THE DUMBEST THINGS GLEN MACNOW HAS WRITTEN TODAY!

Glen Macnow calls himself The Professor, or at least the people who run the Philly Metro do.

The Blind and Absent-Minded Professor!

He writes a weekly column for the free throw-away (on merit) newspaper, and his sensibilities are so off the rails that he needs to be called out.

Even Stevie Wonder could have seen that the reasons the Eagles passed way more than they threw in Monday night’s 26-24 loss to the Atlanta Falcons were:

(1) The Eagles’ offensive line was getting bitch-slapped all over the field by the Atlanta D-line, and coach Chip Kelly, seeing this, opted to pass more; and

(2) The Eagles fell behind 20-3 at halftime, making running the ball counter-productive and time-consuming.

But Macnow missed both of these elements and instead wrote this today:

I tuned in Monday night and Andy Reid was the Eagles coach again.

How else to explain that first-half game plan? At one point, they had executed five running plays – and 26 passes. It felt like one of those Big Red Era games where the offensive line gets off to a slow start and the coach scraps the run. It ended with reigning NFL rushing king DeMarco Murray not touching the ball for the last 10 minutes of a close contest.

Chip Kelly also seemed Reidian in opting for the field goal with the Eagles 4th-and-1 on Atlanta’s 26 with 2:32 to go. It’s easy to second-guess that call, because even a successful kick would give the ball back to Matt Ryan and Julio Jones down just two points.

More so, I was struck by the look of indecisiveness on Kelly’s face – again evocative of Reid struggling to think on his feet. It led to the field goal team rushing in late, which seemed to rattle kicker Cody Parkey.

The “look of indecisiveness”?

Why don’t you go all Sam Donnellon on us and read his body language.