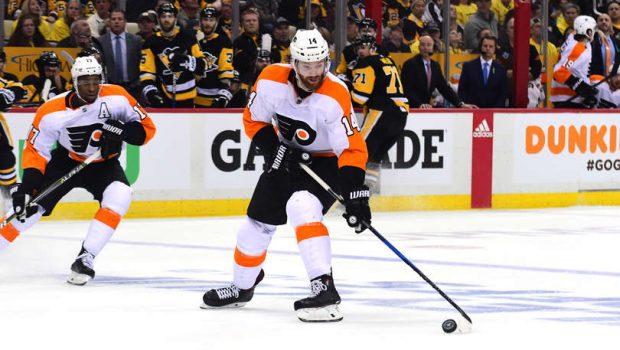 ONLY FLYERS COOTS AN AWARD: LET’S GIN UP SOME PHONY OUTRAGE!

The Flyers got shut out of the five NHL awards announced Monday night, and the outrage from the lame-ass local media is as phony as a degree from Trump University.

The Orange and Black didn’t even have a finalist.

Over a week ago, Sean Couturier won the Frank J. Selke Trophy, while Alain Vigneault was runner-up for the Jack Adams Award and Oskar Lindblom was a finalist for the Bill Masterton Memorial Trophy.

One Flyer did receive a couple of votes for an honor and another Flyer has the potential to be up for one in the future.

Let’s take a look at the award winners with the full voting and some Flyers favor:

The Oilers’ Leon Draisaitl won the Hart Memorial Trophy, which is awarded “to the player adjudged to be the most valuable to his team,” an honor voted on by the Professional Hockey Writers Association.

The last Flyers player to win the Hart Trophy was Eric Lindros in 1994-95.

During 2017-18, Claude Giroux finished fourth in the Hart voting after scoring the NHL’s second-most points with 102.

The Predators’ Roman Josi won the James Norris Memorial Trophy, which is awarded “to the defenseman who demonstrates throughout the season the greatest all-round ability in the position,” an honor voted on by the Professional Hockey Writers Association.

Ivan Provorov received two fifth-place votes. With Provorov only 23 years old, the Flyers hope their foundational piece will be in the conversation moving forward.

No Flyers defenseman has ever won the Norris Trophy.

The Jets’ Connor Hellebuyck won the Vezina Trophy, which is awarded “to the goaltender adjudged to be the best at his position,” an honor voted on by NHL general managers.

Hart also finished top 10 in wins. Similar to Provorov and the Norris Trophy, many expect Hart to be in the Vezina discussion down the road.

The last Flyers player to win the Vezina Trophy was Ron Hextall in 1986-87. Bernie Parent won it twice.

The Avalanche’s Cale Makar won the Calder Memorial Trophy, which is awarded “to the player selected as the most proficient in his first year of competition,” an honor voted on by the Professional Hockey Writers Association.

No Flyers player has ever won the Calder Trophy.

Gostisbehere was the runner-up in 2015-16, losing out to Artemi Panarin and finishing ahead of Connor McDavid.