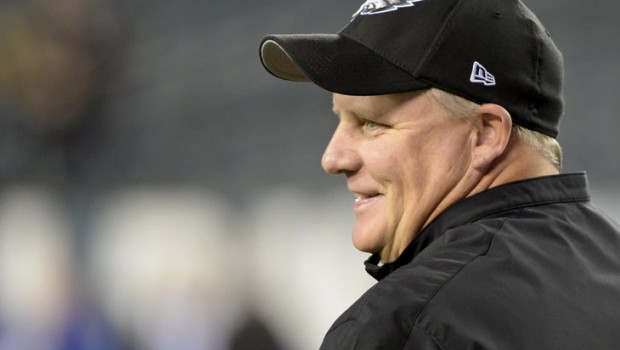 ONE WAY FOR EAGLES AND CHIP TO QUIET CRITICS — BEAT THE JETS!

Anyone who thinks Chip Kelly has always intended to rush back to college coaching will be watching closely tomorrow.

And with all that is ailing the Eagles’ offense right now, Kelly has his hands full. It looks like he still doesn’t have a quarterback, and winning his struggle for complete power over the roster has only created more fodder against him through two weeks.

It’s way too early to write this team off, and the NFC East is way too mediocre to put Kelly on any hot seats, yet, but he’s set himself up to be Public Enemy No. 1 in Philly unless he turns it around against the Jets.

And the Jets defense has plenty of means to slow down an offense that is humming along, much less one as desperate as the Eagles. This Jets team isn’t going to be an easy out this season and with each week seems to be getting further removed from the rampant dysfunction that has defined them in recent years. Could you imagine a 3-0 start for Gang Green?

DeMarco Murray is going to lose his stuff on the sidelines if there are no holes to run through and he keeps averaging damn near negative yards per attempt. Sam Bradford looks like an injury waiting to happen (again), while other oft-injured players are already hurt again (Kiko Alonso), Bryon Maxwell is doing his best Bradley Fletcher impersonation (or was it Cary Williams?), and those two guards Kelly was so high on are part of an offensive line that can’t do anything right.

Kelly needs one of the receivers he’s drafted the past two years (to replace DeSean Jackson and Jeremy Maclin) to do something ASAP. And you know Jets’ coach Todd Bowles will blitz a lot. Jets will attack Bradford and try to get him on his heels early. He doesn’t respond well to pressure and his confidence, among other things, is already taking a beating. They see him as vulnerable and will try to exploit that.