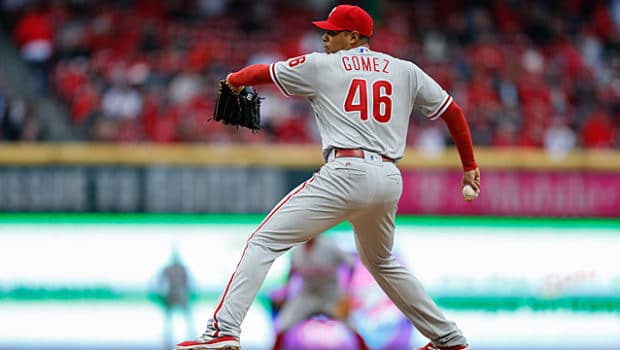 ONE GAME IN, PHILLIES’ CLOSER IS AN OPEN THREAD!

“I’m concerned,” Mackanin said about Jeanmar Gomez’s shaky performance on Monday (above). “I had two guys up in the ‘pen in that ninth inning [Joely Rodriguez and Pat Neshek]. He’s just not getting the ball down the way he did when he was successful. I want to make sure that he gets opportunities, but at the same time, I don’t want to let games slip away.

“He has to execute. Like I said, for me, he’s earned the right to be the closer for right now. But he’s got to get the ball down.

“I like what I saw from Benoit, from Neris. Ramos has the stuff to be a closer. Neshek I haven’t seen enough of,” Mackanin said. “But I certainly have options. I don’t want to make too big of a deal out of it, but I owe it to the team to do what I think is best for the team.”