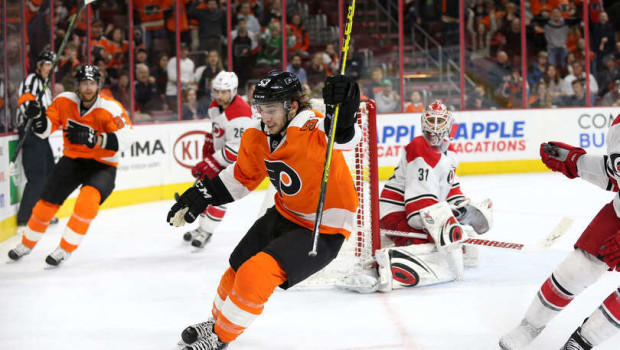 ONCE AGAIN THE GHOST COMES TO FLYERS’ RESCUE WITH OT GOAL!

Once again, the Flyers won a game thanks to a rookie.

Shayne Gostisbehere netted his third goal in an extra session this season, converting at 1:42 to lift the Flyers past Jeff Skinner and the Carolina Hurricanes 4-3 last night at the Wells.

Jakub Voracek had a goal and two assists, and Brayden Schenn and Sean Couturier also scored for Philadelphia, which won its seventh in 11 games while improving to 7-6 in overtime.

Skinner had his second hat trick in three games and the third of his career for the Hurricanes.

Gostisbehere scored the winner with a forehand shot from the left side of the net after receiving a backhand pass from Voracek.

”Three-on-three is built for him,” Voracek said. ”He’s a great skater with a great shot. He’s smart as well and knows when to jump in.”

Gostisbehere also had the winning goal in overtime in Philly’s 3-2 victory over Carolina on Nov. 23.

”It’s definitely fun, for sure,” said Gostisbehere, who has six goals and five assists in 15 games. ”It’s the guys around me. (Voracek) with the pass – he’s one of the best in the NHL for a reason.”

Said Hakstol: ”He made no mistake on a hell of a play by (Voracek).”