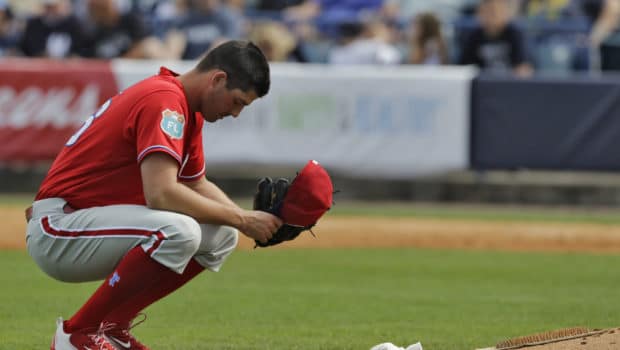 Phillies prospect Mark Appel (above), the former No. 1 overall draft pick who is currently rated the club’s No. 4 prospect, was placed on the disabled list yesterday with a right shoulder strain.

And Phillies No. 30 prospect Ben Lively was promoted to Triple-A Lehigh Valley from Double-A Reading, where he was 7-0 with a 1.87 ERA in nine starts for the Fightin Phils.

Lively, who was acquired from the Reds for Marlon Byrd during the offseason, held Eastern League hitters to a .185 average, striking out 49 in 53 innings while walking 15 and posting a 0.94 WHIP.

Appel, whose fastball normally reaches the mid-90s, suffered from a significant drop in velocity in his last start, struggling to hit 90 mph on Sunday for Lehigh Valley.