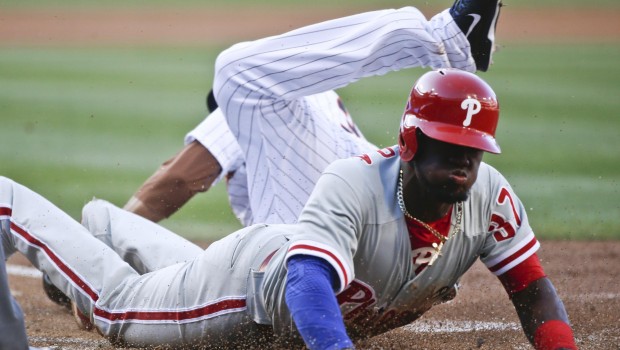 Odubel Herrara scored on a wild pitch in the third inning.

If major league baseball had the same culture as the NBA or NFL, in which the spotlight on draft picks is so intense that finishing last has a significant upside:

Phillies fans might be screaming, “Why not just tank the rest of the season?!”

But, after spending most of the 2015 campaign with the worst record in all of baseball, the Phillies are no longer last in the NL East.

The Phillies (44-67) beat the San Diego Padres 4-2 on Saturday night and escaped the NL East cellar for the first time since May 27, with Florida’s 7-2 loss to the Braves.

“We had the first draft pick and I screwed it up for us,” interim manager Pete Mackanin said.

Mackanin was joking, but of late, the Phils haven’t been a convenient punch line, winning 15 of 20 games since the All-Star break, the best in the majors.

“It’s fun to watch these guys,” Mackanin said. “They are having a good time playing aggressive and they are pulling for each other. It is contagious.”

Adam Morgan held down San Diego over six innings and Odubel Herrera had two hits and two RBI to lead the Phillies.

Morgan (3-3) allowed two runs, one earned, and six hits, with a walk and four strikeouts.

“The second time around I was too fine and starting picking at the corners and fell behind guys,” Morgan said. “And they took advantage of it.”

Ken Giles pitched the ninth, earning his fifth save.

Tyson Ross (8-9), who had won three of his last four decisions, was charged with three runs and five hits in seven innings, as the Padres lost their fifth straight. Ross did retire the last 14 batters he faced.

“I just didn’t come out making pitches in that first inning,” Ross said. “A leadoff double and then trouble after that.”

“I think he was affected by the start time, he sat for a long time,” Murphy said. “After that he rolled, he was his normal self.”

The Phillies have been nothing like their normal selves of the first half. After setting a franchise-record with 62 losses before the All-Star break, Philly is sizzling.

“It’s been great,” Morgan said. “There is a new guy coming up big every other day. It’s fun and we got to keep it rolling.”

Jedd Gyroko drove in Justin Upton with a single to pull within 3-2 in the sixth. Upton reached second on a two-out single and advanced on Herrera’s error.

The Padres cut the deficit to 3-1 in the fourth. Yangervis Solarte opened with a single, took second on Derek Norris’ hit and scored on Matt Kemp’s single.

When Herrera bobbled the ball in center, Norris was thrown out trying to advance to third. Upton walked, but Morgan retired Gyorko and Yonder Alonsoto limit the damage.

The Phils extended the lead to 3-0 in the third on Herrera’s second RBI. He drove in Cesar Hernandez with a single, after Hernandez singled and stole second.

The Phillies scored twice in the first inning, thanks in part to their aggressive base running.

Chase Utley opened with a double, took third on a ground out and came in on Herrera’s single.

Herrera stole second and advanced to third on shortstop Clint Barmes’ throw to Alonso on Maikel Franco’s grounder, just beating Alonso’s relay to Solarte. Herrera gave the Phillies their second run when he scored on a wild pitch, even though the ball barely eluded Norris.

“(Herrera) plays like his hair is on fire,” Mackanin said. “He scored on that wild pitch and everyone on our bench is saying, `no, no’ and he beat it. He’s still going to make some aggressive mistakes but he’s playing hard.”