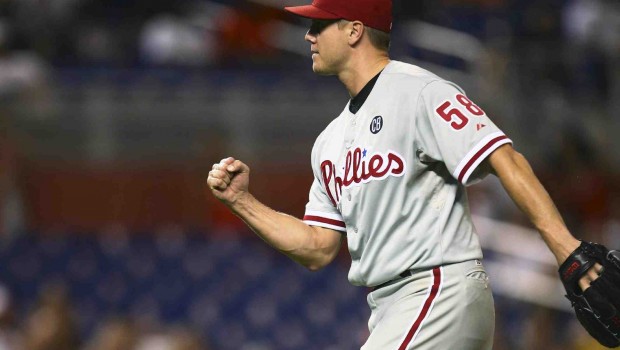 OMG! PAPELBON RETURNS, HOWARD GETS A HIT IN PHILLIES VICTORY

If this is the last weekend Phillies fans have a chance to see Ryan Howard and Jonathan Papelbon, at least they got a chance to express their appreciation, or lack thereof.

Papelbon (photo above) made his first appearance in Philly since he made a lewd gesture aimed at the crowd as he left the field a few weeks ago, closing out the Phillies’ 5-4 victory over the Atlanta Braves on Friday night.

The game was Papelbon’s first at home since he blew a save against the Marlins on Sept. 14 and lost his composure when he was booed coming off the field. He grabbed his crotch in response, and then bumped umpire Joe West.

Papelbon denied that he was insulting the fans but served a seven-game suspension.

The closer entered Friday to a chorus of boos that got louder when he was introduced. But the fans gave him a standing ovation when he got Joey Terdoslavich out on a grounder to end it for his 39th save in 43 chances, prompting Papelbon to pump his right fist before embracing catcher Carlos Ruiz.

Marlon Byrd drove in the go-ahead run with a seventh-inning groundout.

Luis Garcia (1-0) pitched a scoreless seventh to earn the win.

Chris Johnson homered for Atlanta, which dropped its ninth in 11 games while falling to 5-18 this month.

Philly took the lead in the seventh off Jordan Walden (0-2). Ruiz led off with a walk and went to third on Ryan Howard’s one-out double before scoring on Byrd’s groundout to second.

Howard, who may also be playing somewhere else next season, snapped an 0-for-15 skid with the hit.

Atlanta took a 4-0 lead in the fourth on Johnson’s two-run homer to left. The Braves jumped on the board with a pair of runs in the first on RBIs by Freddie Freeman and Justin Upton.

Ervin Santana allowed four runs on eight hits in 5 2/3 innings, ending the season with a 14-10 record.

Jerome Williams gave up four runs on eight hits in six innings. The veteran right-hander finished 4-2 with a 2.83 ERA in nine starts for Philly since claiming him off waivers on Aug. 10.