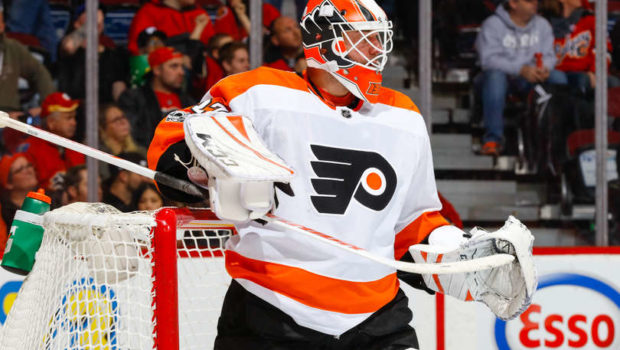 The Flyers have actually won their first NHL game in 25 days!

They ended their 10-game losing streak with a 5-2 win against the Calgary Flames.

Former Calgary goalie Brian Elliott (above) made 43 saves for Philly, which was 0-5-5 during the streak and hadn’t won since a 3-1 victory against the Chicago Blackhawks on Nov. 9.

“That’s a big streak to end, and in doing it the way we did tonight with punctuation was really good for our group,” Elliott said. “We’ve got to take that and harness that and take it to the next game. We’ve got to enjoy this though. We’ve waited a little too long for it.”

The Flyers avoided losing 11 consecutive games for the first time in their history.

Elliott, who signed a two-year contract with the Flyers on July 1, started 45 regular-season and four Stanley Cup Playoff games for the Flames last season after being acquired in a trade from the St. Louis Blues on June 24, 2016.

“We had some success, made the playoffs here (with the Flames),” Elliott said. “I’ve got a lot of friends over there, but when the puck drops, it’s no friends and I really wanted that one tonight.”

“It’s a huge win for our group, I think,” Laughton said. “It started to slip a little bit. We get to 10 games and you start getting in your own head. It’s just a really good feeling for this group right now.”

“That was a tough one,” Calgary forward Matthew Tkachuk said. “We need to be better.”

The Flyers scored three goals in 1:11 in the second period to take a 4-1 lead.

Monahan shot over Elliott’s shoulder from a sharp angle with 1:15 left in the second to make it 4-2.

Laughton scored again 1:51 into the third period to put the Flyers up 5-2.

“It’s a good feeling,” Laughton said. “Can’t say it enough. To get a big win like that collectively as a group, I thought everyone battled really hard.”