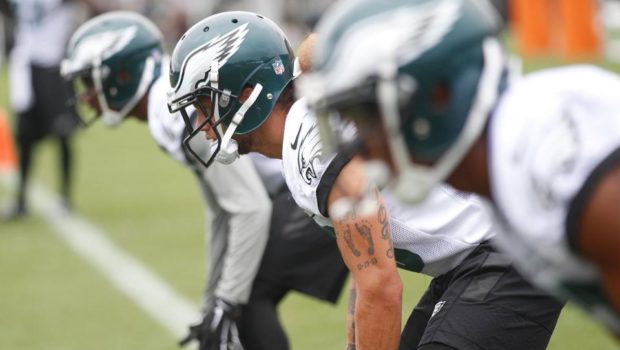 Doug Pederson has reintroduced a concept to Eagles training camp that his predecessor, Chip Kelly, eschewed:

During the three years that Kelly was the coach of the Eagles, the team didn’t allow players to tackle their teammates to the ground during training camp practices.

Pederson has brought full contact practices back and the team held their first two “live” periods of training camp on Wednesday. Avoiding injuries was the reason that tackling was nixed in recent years, but Pederson said Wednesday that the benefits balanced out the risks.

“Listen, I’ve been around this business a long time to know that this is a contact sport and injuries are part of the game,” Pederson said in comments distributed by the team. “I’m not going to shy away from the tackling or shy away from the hitting just to try not to get [anybody hurt]. Do you want anybody [to get hurt]? No, you don’t want anybody to get hurt. But at the same time, if we learn how to practice in pads and then take care of each other when we’re in those situations, it’s just going to make us a better football team down the stretch. The guys will learn how to practice and play fast, and that’s what you want.”

Pederson said he liked the energy and competition that the team showed during the hitting periods and it doesn’t appear anyone went down with an injury, which is likely just what the Eagles hoped would be the results of tackling’s return to their practices.