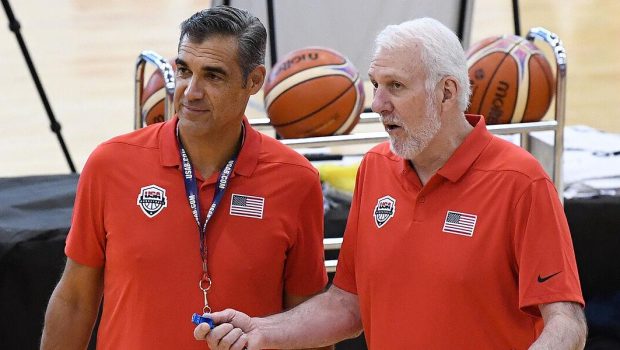 OLYMPIC GOLD BOSS POP TO CRITICS: ‘HOW THE F— YOU LIKE US NOW?!’

Gregg Popovich (above with Nova’s Jay Wright, his assistant) took some heat for a loss to France in the early rounds of the Tokyo Olympics.

But then the USA got its act together and took home the gold medal.

“In the beginning, people were talking about ‘why is he on the team, you should have taken him? What happened to him, why is he there?’ Popovich said. “All the pundits — all these people who think they know something.

“Then we start out getting our ass kicked after a couple of practices. There it comes again.”

The five-time NBA champion coach of the San Antonio Spurs revealed that the gold medal win was the best feeling he’s ever had in basketball.

“You guys went through all that stuff, and your families were sacrificing back there the same way,” Popovich continued, starting to choke up. “That’s why I’m so proud to be part of this. It’s like the best feeling I’ve ever had in basketball.”

Then he dropped the mic.

“I would just like to say to all of those people out there,” Popovich continued. “How the ‘f*** you like us now?”

This person is the best.