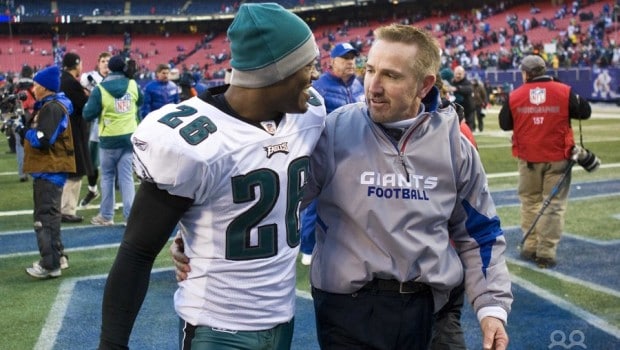 A disturbing pattern is developing at the NovaCare complex.

When the Eagles are in doubt about a hiring decision, they almost always set the default position to:

Let’s bring back someone who knows the organization and the market. Instead of, let’s get the best man.

The Eagles were reportedly hot on the trail of Ben McAdoo before the Giants hired him as their new head coach and they spoke to McAdoo’s predecessor Tom Coughlin before ultimately deciding to hire Doug Pederson.

The Daily News is reporting that the Eagles are interested in hiring Steve Spagnuolo (above with Lito Shepherd) as their defensive coordinator.

Spagnuolo and Pederson were both assistants under Andy Reid with the Eagles, although they didn’t work for the team at the same time. Spagnuolo moved on to his first stint with as the Giants defensive coordinator in 2007 and promptly won a Super Bowl ring that helped propel him to a three-year run as the head coach of the Rams.

His return to the Giants in 2015 didn’t go nearly as well, although the Giants reportedly want to bring him back and can block Spagnuolo from moving to any other team for a coordinator job.