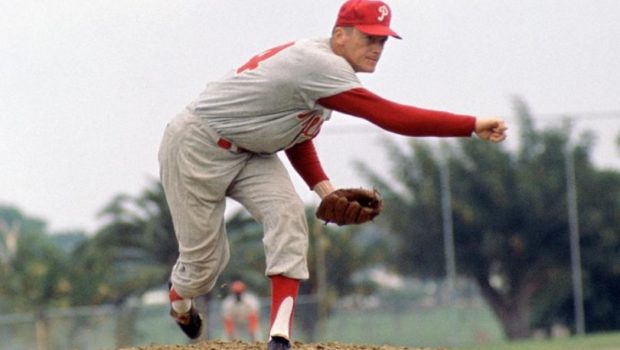 He was proud that over an 11-season stretch, he never missed a start. “They wrote down my name and I went to the post,” Bunning said.

And he once struck out Ted Williams three times in one game!

Alas, even legends must eventually leave us.

The baseball player-turned-politician who was such a family man that he threw a perfect game on Father’s Day 1964 for the Phillies against the Mets with his childhood sweetheart and wife, Mary, in the stands.

He won 100 games in both leagues and was second only to Walter Johnson is strikeouts when he retired.

I was Legislative Director for Congressman Jim Bunning for his first six years in Congress. Linda and I worked on more campaigns than we can remember.

The Bunning family has been intertwined with ours for over 30 years. His irascible spirit and unflinching determination to always do the right thing for his family and constituents, molded my character. It is a debt I have repaid by passing along his spirit to my children.

One of Bunning’s nine kids once asked me what it was like to work for their father. I laughed that the answer was simple. So long as you gave 150 percent in your job, anticipated his every move, dove head-first for grounders, and were loyal to a fault, Jim Bunning was easy to work for.

Whether you were part of his Congressional staff or a utility outfielder on his ball team, Jim demanded only your best. And you gave it or incurred his over-the-glasses stare. Like a batter taking a pitcher’s part of the plate, everyone who worked for Jim knew the stare.

Bunning caught me impersonating him one time. I got the stare.

But our loyalty was a two-way street. In return, our lives became his concern. Bunning wanted success for us and our families. Emails and texts are flying around today between former staffers about how Jim sat in the office and held someone’s hand as they struggled through some sort of personal trauma.

Over more than two decades in Washington, Jim and Mary Bunning became surrogate parents to a raft of twenty-something staffers a long way from home. They treated us like family. Each and every former staffer considers themselves the 10th Bunning kid. One put it well by saying it took working for someone else to understand how much the Bunnings truly loved us all.

The last time I saw Jim, he was frail from the effects of his first stroke. His speech was weak, but it didn’t dampen his enthusiasm for the visit. We talked baseball, politics, and, of course, family. Little tidbits about my wife and our kids made him smile.

Jim Bunning once told me that great pitchers never give up the ball. They make the manager take it from them. Yesterday, God called Jim Bunning home, taking the ball from him and commending him on a life well played.