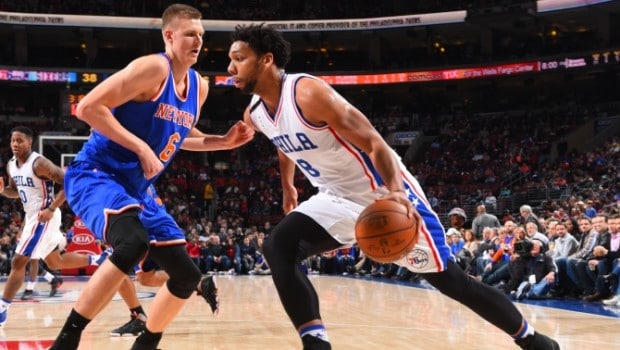 For NBA junkies, last night’s Sixers game was a highlight because of the match-up between Philly’s Jah Okafor and the Knicks’ Kristaps Porzingis (above), the No. 3 and 4 picks from last June’s draft.

Okafor, who missed Philly’s first meeting vs. New York on Dec. 2 because of a suspension, scored 20 points for the Sixers in their ninth straight loss. They fell to 1-27.

Arron Afflalo had 22 points and seven rebounds, Derrick Williams scored 17 off the bench and Knicks beat the Sixers 107-97 for their third straight victory.

Okafor was chosen third overall in this year’s NBA draft and Porzingis was picked next. They both got huge cheers whenever they touched the ball.

It was the second straight game Porzingis clashed against another top rookie. The 7-foot-3 Porzingis blocked seven shots in a 107-102 win over Minnesota and No. 1 overall pick Karl-Anthony Townson Wednesday.

”For me, it’s exciting to go up against those guys,” Porzingis said. ”We went through the draft process together and played in the summer league and now to go against them in the regular season is exciting. You can test yourself playing against those guys.”

Porzingis had less of an impact against the Sixers than he did against the Timberwolves but got plenty of help from his teammates. Carmelo Anthony had all 16 points in the first half before sitting out the entire fourth quarter.

Lance Thomas added 12 points and Kyle O’Quinn 10 for the Knicks.

Led by Afflalo, who shot 9 for 13, the Knicks made 47.1 percent of their shots and scored 65 points in the first half, leading Sixers coach Brett Brown to blast his team’s defense.

Tony Wroten scored a season-high 15 for the Sixers and Isaiah Canaan had 14. Nerlens Noel, back in the lineup after missing two games with a left eye abrasion, got eight points on 4-for-4 shooting.

An alley-oop from Langston Galloway to Williams gave the Knicks a 46-30 lead with 7:39 lead to go in the second quarter. A 3-pointer by Afflalo put them up by 20 four minutes before halftime.

The Knicks built their lead to 30 in the second half. The Sixers closed the game on a 29-9 run.