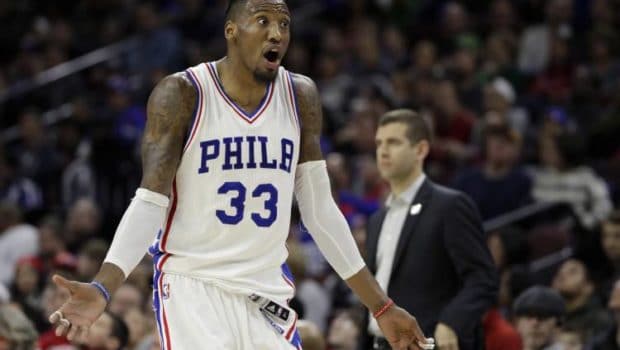 OKAFOR, COVINGTON SHUT DOWN FOR SEASON AS SIXERS GET BLITZED BY CAVS 122-105!

James made 14 of 22 shots in 30 minutes as the Cavs snapped a three-game losing streak and won for just the third time in eight games to end the month 7-10.

It’s been an alarming stretch for the NBA champions, who are running out of time to get tuned up for the postseason. But against the lowly Sixers, Cleveland regained some of its swagger before heading into April when the real fun begins.

But beginning with Irving’s act to protect James, who got drilled from behind by Anderson, the Cavs showed that while they’re still struggling to find their groove, they remain as close as ever.

“It’s about it being a brotherhood around here and not letting anything happen to each other,” James said. “On the court, our chemistry took a hit. Our camaraderie didn’t. At the end of the day, we have to fix it and we’re here to fix it. This is what we have and we know that, so as we continue to get our guys healthy and we continue to get into the flow of things, we’ll figure it out.”

Kevin Love added 18 points and J.R. Smith made four 3-pointers as the Cavs won their ninth straight over the Sixers.

“They played at a championship level,” coach Brett Brown said. “They took their frustrations out on us. It looked like they had their mind set on fixing some things versus the 76ers.”

Richaun Holmes and rookie Timothe Luwawu-Cabarrot scored 19 apiece for Philly, which dressed only nine players after shutting down Jahlil Okafor and Robert Covington for the remainder of the season with knee injuries.

The Cavs have been shaky for some time with defensive issues, injuries and inconsistency leading to questions about whether they can repeat. Following Thursday’s loss in Chicago, the Cavs held a players-only meeting to clear the air.

Cavs coach Tyronn Lue said the meeting would be meaningless if the Cavs didn’t play better, and they finally did just that, blowing the game open in the second quarter by outscoring the Sixers 38-23. James had two dunks in a span of 15 seconds as Cleveland built a 23-point lead.

Love knocked down a pair of 3-pointers early in the third and the Cavs entertained their crowd with a few alley-oop dunks while opening their lead to 32.

James, who was pulled 90 seconds into the fourth, was in a foul mood following Thursday’s game. He was on the floor Friday at Quicken Loans Arena about two hours before tip-off to get up some shots, something he routinely does for important games.

Given the state of the Cavs, this one was significant.