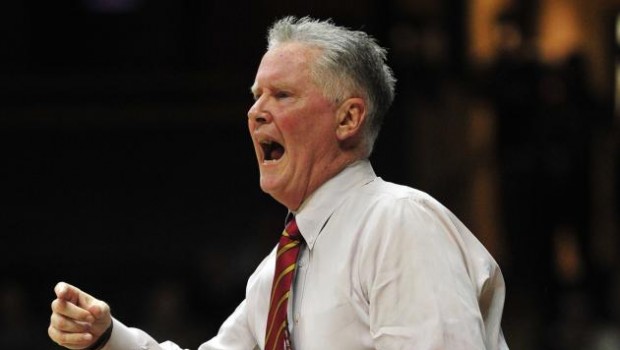 For Fran O’Hanlon, his match-up in the NCAA tournament Thursday is sort of like:

Deja vu all over again.

His 16th seeded Leopards will play his alma mater, the top-seed Villanova Wildcats, in the second round of the NCAA tournament on Thursday at the CONSOL Energy Center in Pittsburgh.

“Everything is a lot of fun right now and up until game-time,” O’Hanlon said. “That’s when it gets scary. I watched Villanova run through the Big East. They’re a terrific basketball team.”

The Wildcats made it to the Final 8 in O’Hanlon’s senior season and the following year (1970-71) advanced to the title game before falling to John Wooden and UCLA, which captured its fifth of seven straight national championships.

O’Hanlon won at the high school level, leading Monsignor Bonner to the Catholic League title in 1988 — he was a star for Bonner in the ’60s — and went to three NCAA Tournaments when he was part of Fran Dunphy’s coaching staff at Penn in the 1990s.

O’Hanlon admits its going to seem a bit strange coaching in the NCAA tournament against the school he once played for.

“I’m a huge Villanova fan,” O’Hanlon said. “I root for them all the time, but I can guarantee you on Thursday I won’t be rooting for them.”

The way it was playing out, O’Hanlon admits he half-expected to draw Villanova.

“I saw a lot of the different scenarios but Joe Lunardi (ESPN analyst) had us playing them all along and he’s usually pretty accurate,” O’Hanlon said.

O’Hanlon has the utmost respect for veteran Villanova coach Jay Wright. Contrary to what some may think, O’Hanlon says he never was a serious candidate for the ‘Nova job when Wright was hired.

“My family told me I was (a candidate) but that was it,” O’Hanlon said. “They made a terrific hire (Wright).”

O’Hanlon would like to think his underdog team might be able to sneak up on the heavily favored Wildcats. But Villanova and Lafayette played in the 2013-14 opener and the Leopards put up a great fight before Villanova pulled away in the final minutes for a 75-59 win.

O’Hanlon has high regard for all the Villanova players – especially senior guard Darrun Hilliard.

“I think Hilliard is terrific,” O’Hanlon said. “He’s really developed and come a long way. He’s become one of the better players in the country.”

O’Hanlon was proud to say that two of his former Villanova teammates, Chris Ford and Mike Daly, were at Kirby Sports Center last Wednesday to help cut down the nets after the Leopards defeated American 65-63 to win the Patriot League championship.

Ford went on to play 10 successful seasons in the NBA with the Detroit Pistons and Boston Celtics.

“I’m sure a lot of them (former teammates) will text me and wish me good luck,” O’Hanlon said.

Villanova opened the season against Lehigh in the first college basketball game played at the new PPL Center in Allentown. The Mountain Hawks, whom Lafayette split two games with this season, gave Villanova all it could handle before the Wildcats escaped with a 77-66 victory.

Although it’s always fun to make comparisons, O’Hanlon is realistic enough to say that scenario means absolutely nothing.

“Villanova is a much different team now than they were then,” O’Hanlon said. “We’re going to play the best we can. But they’re a scary basketball team. They’re so good. They’re a fun team to watch. But they’re not fun to play against.”