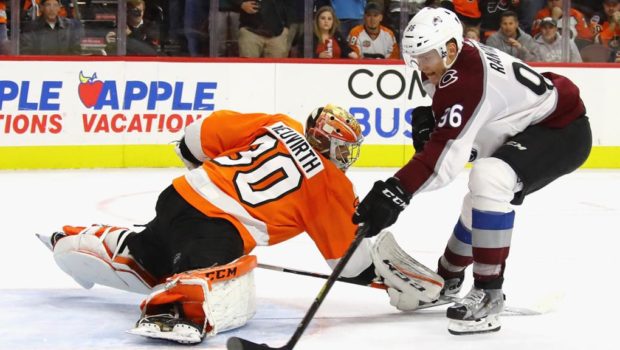 Every time I think the Flyers are ready to take the next step in their seemingly endless battle to escape NHL mediocrity, they play a game like last night’s loss to the visiting Colorado Avalanche.

Mikko Rantanen scored in the third round of the shootout, and the Avs defeated the Flyers 5-4.

Rantanen skated in, faked a shot, and dragged the puck around Flyers goalie Michal Neuvirth to score on his forehand.

“I tried once in practice and I went forehand that time too,” Rantanen said. “This time tried to do the same. It’s easier to finish the forehand.”

Matt Duchene had a goal and an assist, and Blake Comeau, Rantanen and Nail Yakupov scored for the Avalanche (8-5-0), who won their third straight. Semyon Varlamov had 33 saves.

Rantanen left for a brief time early in the third period after getting hit in the mouth by the stick of the Flyers’Michael Raffl. He was fine except for a swollen top lip.

“I tried to counter-hit him but he got his stick up high,” Rantanen said.

The Avalanche were playing with 11 forwards because Rocco Grimaldi and Matt Nieto were sick, so coach Jared Bednar said it made things easier when he saw Rantanen come back to the bench.

Jakub Voracek had a goal and an assist for the Flyers (7-6-2), and Valtteri Filppula, Claude Giroux and Dale Weise scored. Neuvirth made 23 saves.

“We get down a goal we don’t just pack it in and feel sorry for ourselves,” said defenseman Shayne Gostisbehere, who had an assist in his return after missing three games because of an upper-body injury. “… I think it’s how we’ve been responding, that’s the biggest thing. Our confidence level is through the roof because we just keep going and keep making plays.”

Voracek tied the game 3-3 at 4:33 of the third period when he tapped in Travis Sanheim’s shot that deflected off linemate Sean Couturier, but Yakupov put the Avalanche ahead 4-3 at 5:37.

Colorado took a 3-2 lead in the second with two special-teams goals 43 seconds apart, starting with a shorthanded goal by Comeau at 15:30 and when he snapped a shot past Neuvirth’s glove.

After Sanheim was called for hooking at 15:59, Rantanen tried passing the puck through the crease but it went off the stick of the Flyers’ Robert Hagg and into the net for a power-play goal at 16:13.

Duchene gave the Avalanche a 1-0 lead with a power-play goal with 1.6 seconds left in the first period.

Filppula made it 1-1 at 1:21 of the second period when he redirected Travis Konecny’s pass out of the right corner past Varlamov.

The Flyers took a 2-1 lead on Giroux’s power-play goal at 6:31. Varlamov stopped Gostisbehere’s point shot, but Giroux scored on the rebound.