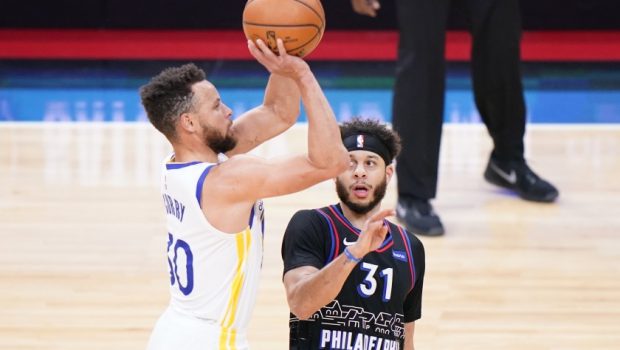 Steph Curry hit 10 3-pointers and scored 49 points, leading the Golden State Warriors to a 107-96 victory over the Sixers.

Curry’s 3 that tied the game at 86-all gave him 11 straight games with 30 or more points, topping Kobe Bryant for the most by any player 33 or older. Curry, who turned 33 last month, also has the longest 30-point game streak by a Warriors player since Wilt Chamberlain in 1964.

The brothers Curry — Steph and Sixers Seth — faced off from the opening minutes when Seth buried a 3 over his sibling. Steph answered with a tough 3 at the end of the first quarter and had 20 points at the half.

Even for Curry, his recent stretch of sensational shooting ranked among the best of his career. He averaged 43.8 points (.573 FG%, .545 3P%, .906 FT%), 5.8 rebounds and 5.0 assists in four games last week. Curry even shook off an injured left ankle that he turned in Saturday’s game against Boston to torch the 76ers.

”There’s something beautiful about it. It really is an art,” Warriors coach Steve Kerr said. ”What he’s doing is amazing to watch. Nobody in the history of this game has ever done what he’s doing right now.”

In the history of the game?

Sixers coach Doc Rivers agreed, even insisting in an argument with his older brother in Chicago that Curry’s season rivals anything Jordan ever accomplished.

”I don’t know if I’ve ever seen anything like the run he’s on,” Rivers said. ”I guarantee you there’s no one that has scored (points) in the way he has.”

Seth Curry scored 15 points and Danny Green hit four 3s for 12 points. Embiid had 13 rebounds and was 11 of 14 from the free throw line.

Curry showed he was still the best player on the court. Golden State’s 29-29 record could keep Curry from MVP consideration but the franchise’s career leading scorer – who hit at least 10 3s for the sixth time this season – is still one of the best in the league.