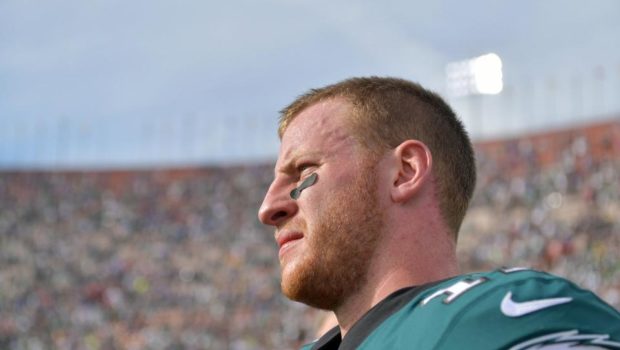 Eagles coach Doug Pederson made official this afternoon what we had all feared:

Quarterback Carson Wentz has a torn ACL in his left knee and will miss the rest of the regular season and the postseason. Wentz suffered the injury in yesterday’s victory over the Los Angeles Ramsa and underwent an MRI this morning.

Pederson also confirmed that Nick Foles will be the Eagles’ starting quarterback.

Wentz came up limping after absorbing multiple hits on a touchdown run that was negated by a holding penalty in the third quarter. He stayed in the game for the remainder of the drive, which he capped with a fourth-down touchdown pass to Alshon Jefferythat gave the Eagles the lead.

The Eagles (11-2), who clinched the NFC East title with yesterday’s victory in Los Angeles, have overcome several key injuries and now have to move forward without their most indispensable player.

Pederson noted his team’s resiliency this season and stressed that the Eagles fans should not “lose faith.” He also said that the Eagles signed Foles this past offseason “for situations like this.”

“If there’s ever an opportunity for me to rally the troops as the football coach, now might be the time,” Pederson said. “You can’t lose faith. This has been a resilient football team all season long.”

Wentz’s injury had a major impact in Las Vegas, as the Westgate SuperBook lengthened the Eagles’ odds to win the Super Bowl from 6-1 to 12-1.

Wentz, 24, threw four touchdowns passes yesterday, passing Sonny Jurgensen for the most touchdowns in a single season in franchise history, a record that had stood since 1961.

Second-year pro Nate Sudfeld is the No. 3 quarterback. Pederson said he hasn’t spoken to personnel boss Howie Roseman about adding a third quarterback yet.