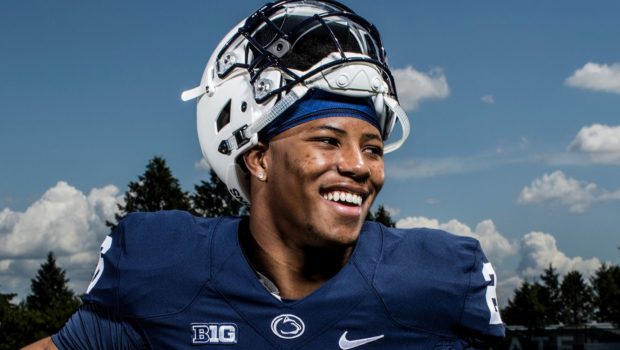 Penn State’s Saquon Barkley ripped the Washington Huskies in the Fiesta Bowl and then said last night that he is taking his talents to the NFL by announcing he was forgoing his senior season..

Barkley ran up 137 yards on 18 carries including one of 92 yards, nearly untouched, to tie for the longest run in school history. He even led the team with seven receptions and threw in a few more stunning leaps, spins and cutbacks along the way.

He made his announcement via Instagram last night, thanking his family, Penn State fans, teammates, coaches and staff in his statement that read, in part, that “God has blessed me with the opportunity to pursue the dream I have had since I was a little kid of playing in the NFL.

“I hope I have left a lasting impression on this University, football program and community at large. It has been an honor and privilege to be able to call Penn State home and represent the Blue & White and all of the great players who came before me and will follow after me. I will continue to work each and every day to continue to represent Penn State the right way as I move on to the next phase of my life.”

Barkley junior season got rolling with a scintillating performance in Iowa in which he broke the school record for all-purpose yards in a game. That shot him to the lead in the Heisman Trophy race.

“Saquon Barkley is a once-in-a-lifetime type of player and it has been an honor to coach him and watch him grow into a fantastic young man,” Penn State head coach James Franklin said in a prepared statement. “Saquon has left a legacy both on and off the field that will long be remembered by the Penn State community.”