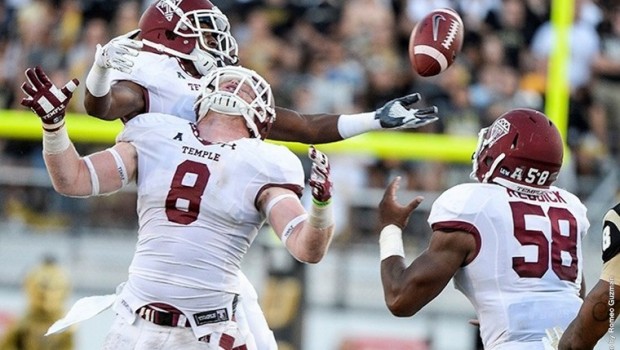 NO OFFENSE, BUT WHERE'S TEMPLE'S O IN 34-14 LOSS TO CENTRAL FLORIDA?

The Knights never trailed and scored on their first three offensive possessions to build a 17-0 lead. The Owls got within 10 points late in the first half, but were held scoreless in the second half.

It was the 11th straight American Athletic Conference win for the Knights. UCF (5-2, 3-0) is one of only two remaining unbeaten AAC teams, along with East Carolina.

Temple (4-3, 2-2) started P.J. Walker at quarterback, but switched to Connor Reilly briefly in the third quarter. It proved to be ineffective, though, as the Owls managed just 182 yards of offense for the game.

The Owls also turned it over four times.

UCF came into the game having scored just 16 first-quarter points in its first six games of 2014.

But an inspired Knights’ offense had 17 points by the end of the first 15 minutes on Saturday, and ran its lead to 27-14 at halftime against the American’s top scoring defense. The Owls defense entered the day allowing opponents only 17.2 points per game.

UCF was also more balanced offensively than it’s been in several games, using its rushing attack to open up passing lanes for Holman, who spread around 25 completions to seven different receivers. The Knights’ 466 yards of total offense was their most since posting 556 yards in their Fiesta Bowl win over Baylor last season. Holman’s 336 yards passing was also a season-high.

After relying almost exclusively on the run during an 11-play, 58-yard drive to take a 17-0 lead, the Knights responded to Temple’s first score with a 54-yard touchdown pass from Holman to Breshad Perriman that stretched their lead back to 24-7.

Temple’s special teams gave the Owls a little life and got it back to a two-score game a series later when Samuel Benjamin came off the edge to block Caleb Houston’s punt. Benjamin scooped it up and ran it in for the touchdown.

On the ensuing series, Houston had a second consecutive punt blocked — this time by Temple’sMichael Felton. But the Owls couldn’t capitalize, quickly going three-and-out.