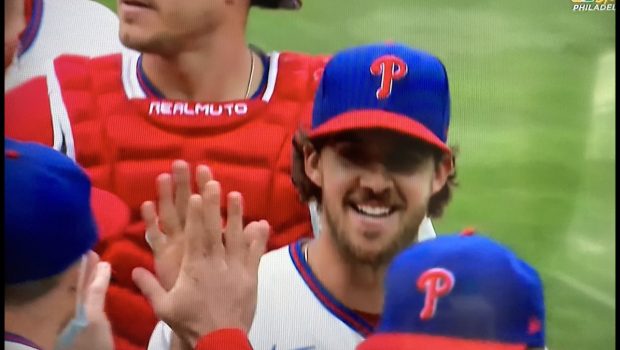 ‘OFFENSE IS CONTAGIOUS,’ AND PHILS ARE FAVES TONIGHT WITH NOLA!

The Phillies are back at the Bank tonight against the Braves looking for their third consecutive victory and Aaron Nola is the fave over Drew Smyly.

The Phillies defeated the Washington Nationals 12-6 on Sunday as J.T. Realmuto ripped his 100th career home run, a three-run shot.

“Guys are starting to click a little bit more,” Realmuto said, after some inconsistent play in April and May.

It was the second time in four June games that the Phillies scored at least 10 runs. Bryce Harper appears to be healthy following a series of injuries. Didi Gregorius is close to returning from an elbow ailment.

“I think the pieces are there,” Realmuto said. “I came back slow after the injury. I haven’t felt like myself the last couple weeks — just starting to kind of get in a groove. We’ve got guys starting to click at the right time.

“Offense is contagious. We just have to get rolling. We have to add on when we have the chance … that’s how it carries on to the next game. Hopefully good things are ahead for our offense.”

In his last start, Nola (4-4, 3.84 ERA) became the ninth pitcher in franchise history to reach 1,000 strikeouts. Next up on the list is Curt Simmons, 52 strikeouts away. Steve Carleton leads the all-time Phillies list with 3,031.

Atlanta will also be seeking a third straight win, having defeated the Los Angeles Dodgers 6-4 and 4-2 over the weekend.

“This was a really good series,” Braves manager Brian Snitker said. “It should show those guys we’re as good as anybody out there when we play the way we’re capable of playing.

“Hopefully, it’s something you look back on in two or three weeks and maybe point to this,” Snitker said. “Other than the one inning (giving up eight runs Friday), we played a really good series against obviously the World Series champions. We did a lot of really good things. The bullpen was unbelievable.”

Like most teams, the Braves have been forced to play through a litany of injuries. They appear to have found their rhythm.

“This team is always fighting,” Ender Inciarte said. “So there’s good chemistry on the team and everybody is pulling for the same goal, which is winning a World Series. So, whoever is in the lineup, they’re just trying to do the best they can to help this team win ballgames.”