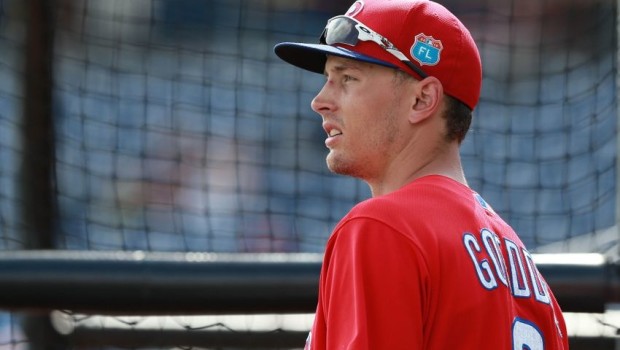 OF TYLER GOEDDEL HAS BEEN A PLEASANT SURPRISE FOR PHILLIES

Tyler Goeddel is looking like he will be headed north with the Phillies to start the 2016 season.

The Rule 5 pick started in left field on yesterday and had two hits and two RBIs. He also scored a pair of runs and ran the bases well.

Goeddel, who has never played above Double A, appears to be a lock to make the club. He’s 23 and he’s very athletic.

“We’ve been encouraged with, not even the results so much of his at-bats, but sort of the way he’s gone about it,” general manager Matt Klentak said. “He’s got a very mature approach in the batter’s box. I think that’s something as we’re projecting how he’ll do in the big leagues this year, that’s something that gives us some comfort. We think he can compete.

“He knows how to work a count. He’s not afraid to hit the ball the other way. In fact, he often tends to hit the ball the other way. I think that lends itself to him having an easier adjustment. But we’ll see. As is the case with any Rule 5 player, his performance will ultimately dictate that. He does not seem overwhelmed by sort of the mental side of things. He seems very comfortable up there. Time will tell.”