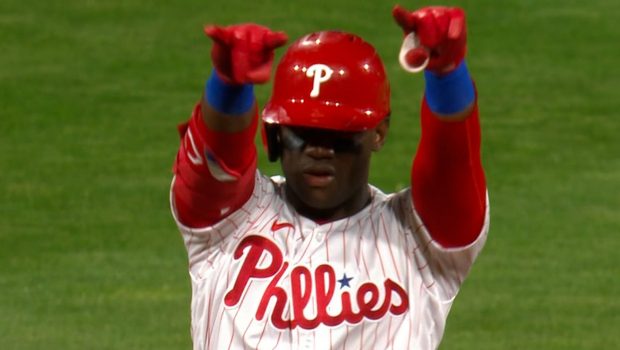 Odubel Herrera went 2-for-4 and homered against the Braves in last night’s loss.

His defense has left something to be desired, but it doesn’t look like the Phillies have any better options in center.

Until Mickey Moniak rejoins the club.

In the fifth inning Dansby Swanson singled and came around to score for a 5-4 lead on a play that started with a wild pitch by reliever José Alvarado (0-2) and a high throw from catcher J.T. Realmuto in an attempt to keep Swanson from reaching second.

The ball sailed past the outstretched gloves of Jean Segura at second and Bryson Stott at shortstop, then went under the glove of center fielder Odúbel Herrera for a two-base error.

It appeared both Segura and Stott could’ve caught the ball — neither was charged with an error — and kept it from getting away.

Herrera charged and overran the ball, then looked even more hapless as he retreated to pick it up near the warning track.