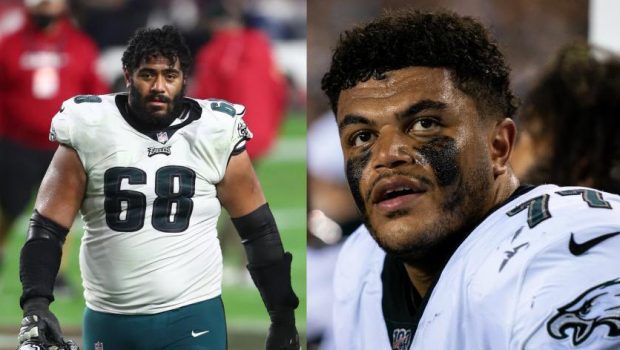 ODDS ARE EAGLES WILL TRADE BUST ANDRE DILLARD BEFORE DRAFT!

The NFL draft is only five nights away, and while everyone on earth is concentrating on mock drafts, the trade market is ripening.

Since being a first-round selection in 2019, one Philadelphia traded up for, he’s been hampered by inexperience and injuries and has only nine career starts.

With Jordan Mailata (above left) now entrenched at left tackle, it would make little sense for GM Howie Roseman to pick up Dillard’s $12.6 million fifth-year option for 2023.

It would be more logical to export him to a tackle-needy team willing to bet on Dillard’s potential – maybe to the tune of a mid-round pick – rather than letting him ride out his final year in Philly as a swing tackle.