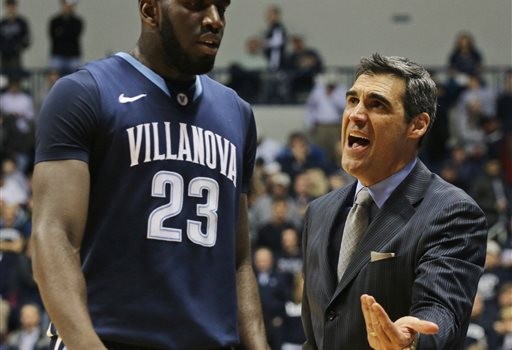 No. 1-ranked Villanova got back in the win column today after taking it on the chin at Xavier last Wednesday.

Kris Jenkins scored 19 points, Josh Hart had 19 on 7-of-8 shooting, and the Cats pulled away from Marquette for an 89-79 victory.

The Wildcats (25-4, 14-2 Big East) rebounded nicely after a midweek loss at No. 5 Xavier to stay atop the conference, one game ahead of the Musketeers.

Six-foot-11 Daniel Ochefu had 18 points and gave Villanova an inside presence to complement Jenkins’ outside shooting. Jenkins was 4 of 9 from 3-point range.

But the young Golden Eagles wilted against the Wildcats’ pressure. Villanova forced three turnovers en route to an 8-0 run to take a double-digit lead, before hitting free throws down the stretch to seal the win.

Jajuan Johnson had 19 points on 8-of-10 shooting for Marquette.

The active Johnson and freshman forward Henry Ellenson combined for 21 points in the first half on 7-of-7 shooting.

Marquette trailed by 42-37 at halftime, and their vocal fans held out hope that their school could pull off their first win over a top-ranked team since defeating Kentucky in the NCAA Tournament in 2003.

But Villanova turned up the pressure whenever the game got tight. Jenkins hit a 3 following the third Marquette turnover early in the second half to give the Wildcats an 11-point lead with 17:53 left.

Villanova forced 17 turnovers overall but was careless with the ball, too, and committed 17.

Still the Wildcats enter the final week of the regular season in control of the Big East. They can ensure a third straight conference regular season title with wins at home over DePaul and Georgetown to wrap up the schedule.

For Marquette, Ellenson finished 13 points, just three in the second half.