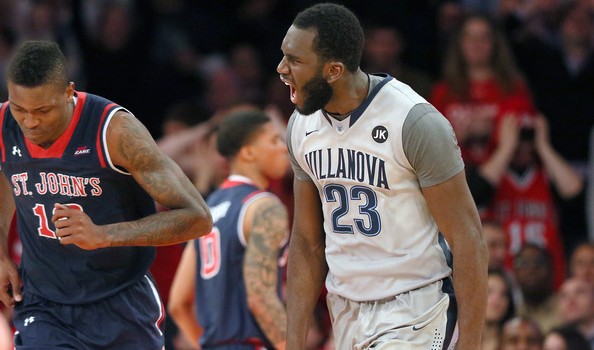 OCHEFU GIVES VILLANOVA THE LOOK OF A FINAL FOUR TEAM

Villanova is 16-1, in control of the Big East (even though it lost at Seton Hall two weeks ago when it shot 31 percent from the floor), is ranked No. 5 nationally and has a real shot to make the Final Four for the first time since 2009.

What is the biggest difference between this year’s Cats and last year’s very good 29-5 team?

He showed enough flashes last season and you figured he would improve this season, especially since James Bell graduated. The 6-10 Ochefu took over Bell’s spot in the starting lineup, and no one envisioned he’d be this good.

Ochefu hasn’t had to do much in Villanova’s last two games because one was against DePaul and the Wildcats hit 15 3s in the other. But in the four previous games, Ochefu averaged 13.8 points, 14 rebounds, and 1.8 blocks in less than 28 minutes.

Ochefu is playing just a little more than he did last season, but he has almost doubled his scoring, he’s pulling down 2.5 more boards per game, his field goal percentage has improved despite attempting more shots, and he’s fouling less.

Given how common it is for big men to be passive, unskilled, and/or inconsistent (Ohio State, Kansas, and Louisville fans are getting headaches from nodding so hard at this), to see Ochefu dominate down low is refreshing.

The Big East might as well send the conference player of the year trophy to Villanova right now and let the Wildcats figure out who on the team deserves it most. If the season ended today, Ochefu would get it.

His presence on both ends of the floor gives Villanova an element it lacked last season, which is why this team has a much higher ceiling than last year’s Wildcats.