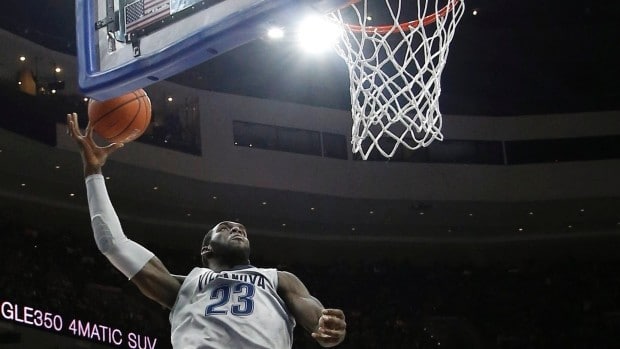 OCHEFU COMES UP BIG IN VILLANOVA’S 73-63 WIN OVER ST. JOHN’S

Villanova’s Daniel Ochefu missed several games recently with a concussion, but he gave St. John’s a headache last night at the Wells.

Amar Alibegovic led the Red Storm with a career-best 18 points. St. John’s has lost 16 in a row, the longest streak in Division I.

“That was not one of our best performances,” Cats coach Jay Wright said. “You have to give St. John’s credit for that. We were fortunate to go inside to Daniel.”

Ochefu, playing his second game after missing three with a concussion, dominated inside. He was 11 for 14 from the field and grabbed nine rebounds.

“My teammates have been doing a great job finding me for easy shots,” said the 6-foot-11 Ochefu.

Villanova came out firing in the second half, going 9 for 11 while building a double-digit lead. Arcidiacono’s 3-pointer capped a 10-3 run and gave the Wildcats their biggest lead to that point, 51-40.

They led by a comfortable margin the rest of the way.

“We tried to get them out of rhythm, but they’re a veteran, well-coached team,” St. John’s coach Chris Mullin said. “When you play the No. 1 team, you have to be perfect.”

St. John’s cut it to 57-47 on an alley-oop slam by Kassoum Yakwe off a pass by Felix Balamou. The Red Storm (7-19, 0-13) twice had an opportunity to get closer but committed a turnover and missed a jumper.

After a pair of offensive rebounds at the opposite end, Arcidiacono hit a 3 to increase the lead to 60-47.

“They might have played as well as any game I’ve seen them in a while,” Wright said. “It’s a credit to Chris and his staff. They play hard for him to the last second. It’s very impressive.”

Malik Ellison’s 3-pointer got the Red Storm to 66-58 with 2:55 left, but Josh Hart made a pair of free throws and Ochefu powered in for a layup to extend the margin to 70-58.

Durand Johnson and Federico Mussini, who lead the Red Storm in scoring with an average of 11.9 points per game, combined for 12.

Playing their first home game since jumping to the top of The Associated Press poll for the first time in school history, the Wildcats took a while to get going.

Villanova was 0 for 11 from 3-point range in the first half before Arcidiacono hit one early in the second. The Wildcats even trailed 9-8 after Ron Mvouika’s 3-pointer 7:30 into the game.

“St. John’s came out and executed their game plan and we didn’t,” Arcidiacono said. “I don’t think there was added pressure being No. 1 at home.”