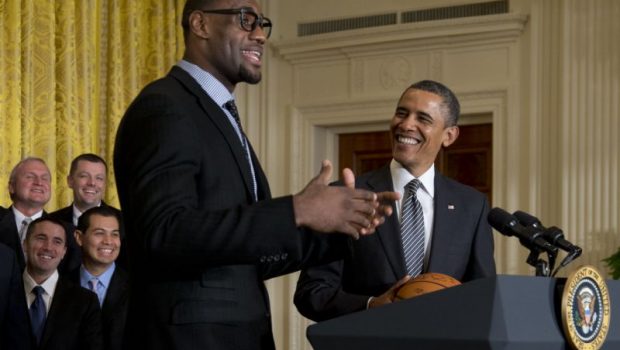 Former President Barack Obama played a hand in the NBA players’ decision to return to the court.

Obama spoke with LeBron James, Chris Paul and a small group of players late on Wednesday night and advised them to return to the court to finish the postseason, according to The Athletic’s Shams Charania.

James and Paul, who is the president of the players’ association, wanted to seek Obama’s advice on how to move forward after a contentious, emotional players-only meeting on Wednesday night — a meeting that James, the Los Angeles Lakers and Clippers reportedly walked out of wanting to end the season completely.

Moving forward with the rest of the season, Obama reportedly told them, was an important opportunity that they could use to contextualize action they wanted to see taken in the country.

“As an avid basketball fan, President Obama speaks regularly with players and league officials,” Obama’s office said in a statement, via The New York Times’ Sopan Dep. “When asked, he was happy to provide advice on Wednesday night to a small group of NBA players seeking to leverage their immense platforms for good after their brave and inspiring strike in the wake of Jacob Blake’s shooting. They discussed establishing a social justice committee to ensure that the players’ and league’s actions this week led to sustained, meaningful engagement on criminal justice and police reform.”

Obama tweeted out his support for the walkouts on Wednesday, and included an emotional interview of Los Angeles Clippers coach Doc Rivers speaking about the shooting and being Black in America.

I commend the players on the @Bucks for standing up for what they believe in, coaches like @DocRivers, and the @NBA and @WNBA for setting an example. It’s going to take all our institutions to stand up for our values. pic.twitter.com/rUGETgAt7P

The NBA and NBPA announced Friday that the postseason will resume on Saturday, and that several specific social initiatives would be implemented. NBA owners have agreed to work with local election officials so that each arena can be used as a polling place for November’s elections. The Bucks’ conversation with Wisconsin’s Attorney General and Lt. Governor resulted in the call for a vote on a police reform bill in the state, too.