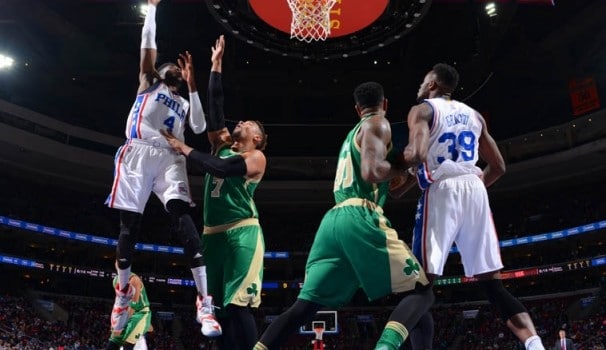 O NO! EX-SIXER NERLENS NOEL’S INABILITY TO SCORE AND HIS DUMB-ASS AGENT SENTENCED HIM TO A SMALL-BALL $4M CONTRACT!

The 23-year-old arrived in Dallas at the trade deadline, after the Sixers unloaded him for Justin Anderson, Andrew Bogut, and a well-protected first-round pick. Dallas seemed smitten from the start, and after Noel averaged 8.5 points, 6.8 rebounds, and 1.1 blocks in limited minutes, Rick Carlisle called re-signing him a top priority.

Then, silence. Top players re-signed or found new homes, then solid role players got their due, then guys past their primes notched deals, then Tim Hardaway Jr. found a $71 million offer with the Knicks—and still, Noel had no deal. The only peep out of either party came from Noel’s then-agent, Happy Walters, who said in mid-July that he was “very disappointed,” and was “waiting on a serious offer.”

We know now what that disappointing figure was: a four-year, $70 million offer made on the first day of free agency, per ESPN. Walters confirmed (via Twitter, #diligencetweets) that Noel’s camp turned that figure down presumably to ask for a maximum contract—one that most everyone, Noel included, seemed to think was a sure thing before the offseason began.

ESPN reported that the four-year deal was then pulled, though Mavs owner Mark Cuban told SB Nation’s Tim Cato that the team might have honored their original proposition if Noel, having seen the lack of a market around him, asked to revisit it. He didn’t.