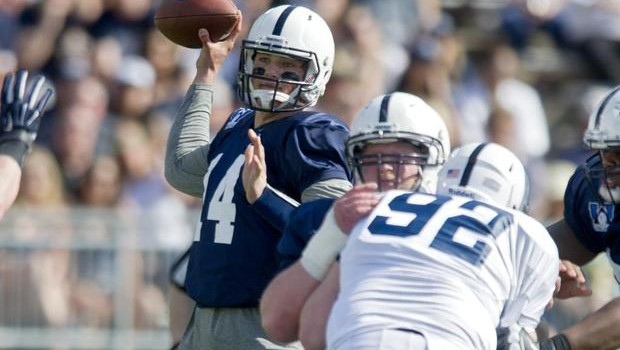 It’s only April, and Penn State quarterback Christian Hackenberg (photo above) is proving he’s a Nittany Lion for all seasons.

Yesterday’s Blue-White game at Beaver Stadium is an example.

Hackenberg was slated to be on the field for one or two series.

That changed with backup quarterback Trace McSorley unavailable due to an undisclosed reason.

Hackenberg played into the fourth quarter, directing seven of the Blue team’s eight drives, and finished his day with a 2-yard touchdown pass to Saeed Blacknall with 10:35 left on a running clock. It was the final score in Blue’s 17-7 win over White in front of 68,000 NitHeads.

Hackenberg went 17 for 29 for 180 yards passing, a touchdown and an interception. He was also sacked five times, highlighting that the offensive line remains a work in progress coming off a season in which the quarterback was sacked 44 times.

It was the first observation coach James Franklin made during his postgame press conference, saying the offensive will continue to be a focus heading into the 2015 season. Franklin said it also makes evaluating his quarterbacks and running backs a challenge.

Hackenberg completed 4 of 6 passes for 24 yards on the first drive of the game, and running back Akeel Lynch punctuated the drive with a 22-yard touchdown run.

Lynch, who rushed for 50 yards on nine carries, said his success will depend on the offensive line.

“Running back is nothing without the O-line,” Lynch said. “The big thing for them is just confidence and communication.”

Mahon said it’s been a complete different game to him this spring.

“I didn’t have the greatest season this past fall,” Mahon said. “And I’d like to contribute more to the team than I did this past season. So right now the biggest thing is that the game is slowing down for me. It’s all starting to make a lot more sense and coming together.”

Franklin said the offensive line is “way ahead” of where it was at as a unit last season. But the line is still developing as Palmer makes the transition from Lackawanna College to Penn State.

“That was great for him today,” offensive coordinator John Donovan said. “I was talking to his (Lackwanna) head coach Mark Duda, he’s like, ‘Yeah, it’s a little different playing in front of 300 people.’

“That’s what he’s used to. So I think that experience for him was great and for a guy who’s just coming in and learning from scratch, he started 15 practices ago.”

Franklin said he didn’t consider pulling Hackenberg after the play.

“He got stepped on,” Franklin said. “That’s football. He reached down, rubbed his toe, shook his foot and went back and got going so to me, it’s also spring ball.

“If we do get a bump, if we do get a bruise, if we do get a strain or a scratch, we got time to get ‘em right before camp so that’s why we tried to have a pretty physical, aggressive spring because we’re still at a point where we’re going to be limited in camp.”

Franklin said Hackenberg will take the next step as a leader, taking ownership of the team, this summer when he watches film and continues to develop his relationship with the receivers and offensive line.

And the head coach hopes the offensive line’s progression continues heading into August.

“It’s not like we were gonna be able to flip a switch and it’s gonna change overnight,” Franklin said. “But I’m confident between now and the start of camp that we can take another step and then continue to grow during camp and be ready to go. 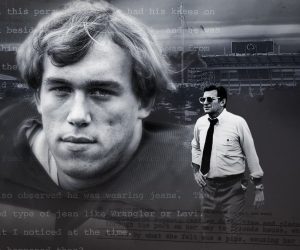