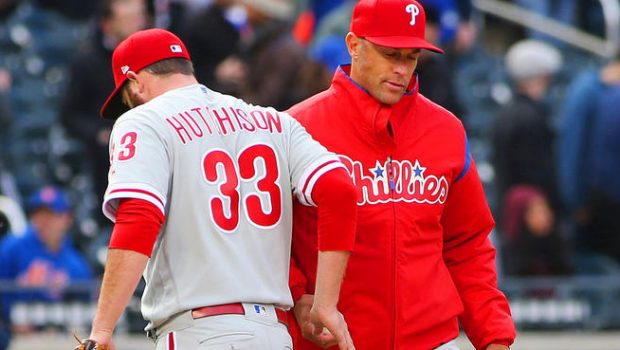 NUMBERS DO LIE! ANOTHER BONE-HEADED KAPLER DECISION COSTS THE PHILS!

The Phillies play their home opener today at Citizens Bank Park, and the reaction from the Phillies’ faithful to their new manager, Gabe Kapler, will be:

Because yesterday in New York, the analytics-driven manager made another bone-headed decision that led to a loss, just as he did last week when he lifted starter Aaron Nola with a 5-0 lead and then the next night when he called for a reliever who hadn’t even warmed up!

The Mets beat the Phillies 4-2 as shortstop Amed Rosario knocked in the winning runs in the bottom of the sixth inning with a two-out, two-run triple over the head of shallow-playing right fielder Nick Williams.

The ball traveled just 330 feet and landed well short of the warning track. The Phillies positioned Williams so shallow because that’s where the analytic numbers dictated the Mets ninth-place hitter would probably hit the ball.

“We were anticipating weaker contact,” Kapler said. “Whenever you anticipate weaker contact, you think about the ball falling in front of you. It felt like the right decision.”

“I don’t know if that was not traditional positioning in right field,” Kapler said. “Whenever you have guys toward the bottom of the lineup that you’re not anticipating to slug and do a lot of damage, playing shallow is just an aggressive defensive position rather than something that is non-traditional.”

“I trust CY (Chris Young),” Kapler said. “Nobody studies harder. The one thing I would say is that ball was smoked. If (Williams) was playing 10 or 15 feet back, I’m not sure he catches that ball.”

So far this season, Kapler has relied on analytics and the results have backfired.

Kapler drew plenty of criticism for the way he handled the Phillies pitchers in the season’s first three games.

On Saturday, Kapler drew the ire of Major League Baseball when he bought reliever Hoby Milner into the game without allowing him to warm up first.

The right-handed Rosario stepped to the plate with score tied, two outs and runners on first and third in the bottom of the sixth. Rosario is not known for his power. He has just four home runs — one of them to right-center field — in 179 at-bats in his brief career.

Phillies reliever Drew Hutchinson was on the mound. The right hander had thrown two shutout innings in the Phillies’ only win — a 5-4 victory over the Braves last Friday.

“We thought we had a really good matchup,” Kapler said. “We had a lot of confidence based on Hutch’s last outing that he was going to come in and slam the door there for us. His slider has been working really effectively from the beginning of spring training all the way through to this moment.”

Hutchinson threw an 82.2 mph slider to Rosario. The ball left Rosario’s bat at 99.7 mph — the 10th hardest-hit ball of the game. Phillies players talked around media questions about where Williams was positioned.

“I didn’t get the job done,” Hutchinson said.

Williams said at first he thought he had a chance to make the catch but then quickly realized he had no chance because of how low the ball was hit.

“If I was at normal depth, I can’t say that I would’ve covered that much ground,” he said. “I’m not sure, and it was a low-line drive.”

The results have not worked out, and many old-school Phillies fans are grumbling. But do not expect Philadelphia to abandon its analytical approach.

“Sometimes if you’re looking at it in a small sample in a very specific time, you can go, ‘That’s not going to work,’ ” Kapler said. “We have to be patient and trust that we’re trying to look at a very large sample size to evaluate if our strategies are working effectively. I can’t express enough confidence that our strategies will pay dividends, but I understand in the short term they haven’t, and that can be disappointing. I get it.”

With four losses in five games, Phillies fans may not buy that explanation. It should be a fun home opener.