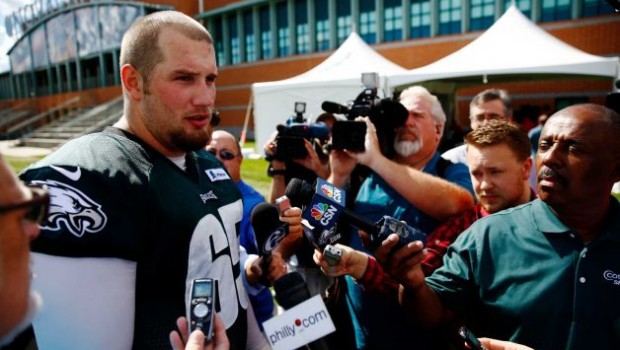 BY THE NUMBERS, THE EAGLES SHOULD BEAT THE RAMS EASILY

As the Eagles prepare to face the St. Louis Rams on Sunday at the Linc, they have to tighten up their defense and hope returning right tackle Lane Johnson (meeting the press this week in photo above) will improve their offensive line.

Philly (3-1 after losing to the Niners last Sunday) has been both good and bad defensively through its first four games. The Eagles held Jacksonville to 2.6 rushing yards per carry, but surrendered 266 passing yards and two touchdowns in the opener.

They allowed 169 yards on the ground a week later despite limiting Indianapolis to 172 passing in a 30-27 road win and held Washington to 84 rushing while giving up 427 through the air in a 37-34 home victory in Week 3.

The Birds then held Colin Kaepernick in check Sunday, but allowed 218 yards rushing in a 26-21 loss at San Francisco.

It certainly hasn’t helped that linebacker Mychal Kendricks has been out since injuring his calf in Week 2 and cornerback Brandon Boykin went down with a hamstring injury against the 49ers.

”We just have to get consistency right now, at all positions,” defensive coordinator Billy Davis said. ”I can’t say one position – corner, safety, inside (linebacker), outside (linebacker), the D line – played a complete game.”

The Eagles, who haven’t won four of their first five since 2006, face a St. Louis team that ranks ninth in total offense (368.3 yards per game) and ninth in passing (264.3) despite playing with third-string quarterback Austin Davis.

Coach Jeff Fisher named Davis the starter for the rest of the season earlier this week, even though he previously said that Shaun Hill would start when he returned from a quad injury.

”My job is to make the right decisions and I felt that I was going to go this way pretty much after the Tampa Bay game based on what I saw, and then the Dallas game was just what really convinced us as a staff and myself,” Fisher said. “And he deserves it. He deserves an opportunity.”

The 25-year-old Davis completed 30 of 42 passes for a career-high 327 yards with three touchdowns and two interceptions in a 34-31 home loss to Dallas on Sept. 21. However, he could be missing a key target in the passing game with Tavon Austin still nursing a knee injury that sidelined him against the Cowboys.

The Eagles, meanwhile, will try to get their ground game on track with LeSean McCoy averaging a career-low 2.7 per carry. The All-Pro running back finished with just 17 yards on 10 attempts last Sunday.

”We haven’t gotten (McCoy) to the second level,” coach Chip Kelly said. “We’re losing some battles at the line of scrimmage, so obviously it’s about getting going and getting started.”

The Eagles might be able to create some running room against the Rams, who rank 30th in rushing defense at 155.0 yards allowed per game. They’ve also given up a combined 68 points in their two losses.

St. Louis built a 21-0 advantage against Dallas only to match the second-highest blown lead in franchise history.

Philly’s Nick Foles also hopes to capitalize after going 21 of 43 for a season-low 195 yards with no touchdowns and two interceptions last Sunday. He had gone nine straight games, including last postseason, with a scoring strike.

The Eagles were held without an offensive touchdown in San Francisco after averaging 33.7 points in the first three weeks.

The Birds have won three straight meetings after McCoy ran for 122 yards and a touchdown in a 31-13 road victory Sept. 11, 2011. The Eagles also have won five of six home matchups since the Rams moved from Los Angeles.