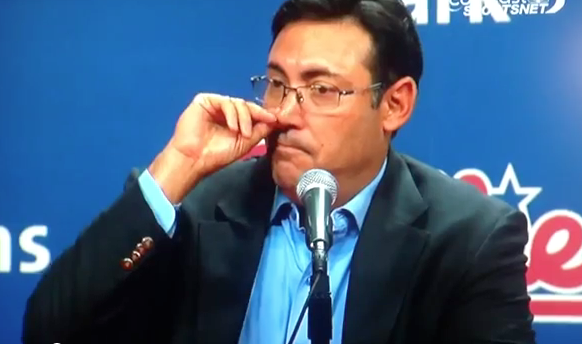 If you want to know what’s going on with the Phillies, reading the local lame-ass media is a waste of time.

You’ve got to check out the Boston Globe, which covers the inner workings of the Phillies like a glove.

After he drove the Phillies franchise into the ground, Ruben Amaro Jr. was fired as general manager. And knows no one will take him seriously now as a GM.

So, Nick Cafardo of The Boston Globe has the report:

Lamonte, who has remade the careers of NFL coaches such as John Fox, Andy Reid, and Jack Del Rio, and transformed Jon Gruden from NFL coach to ESPN star, is now working with the 50-year-old Amaro and trying to sell him as a GM or manager.

Amaro, who spent most of his eight seasons with the Phillies as their GM, would like to manage, and with the Marlins breaking that barrier with Dan Jennings stepping down from the front office to the dugout this season, Amaro, a Stanford graduate, appears serious about the challenge.

Amaro, a former utility player for four major league teams, could appeal to a team such as Miami, which may be looking for a connection with Latin players. Lamonte is close to Tony La Russa, Walt Jocketty, and Pat Gillick, who all have endorsed Amaro pursuing a managing job.

As Cafardo points out, the career change is not as outlandish as it may sound. There’s precedence, there’s endorsements, and Amaro spent eight seasons in the big leagues from 1991-98. If he’s serious, he probably will find work at some point.