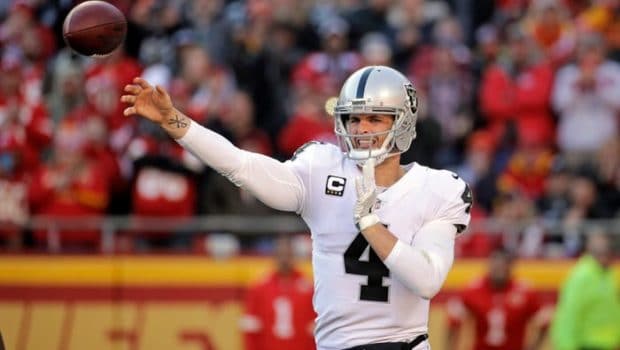 IS THIS NOW A TRAP GAME? RAIDERS ELIMINATED BEFORE EAGLES GAME!

And as the Eagles prepare to take on the Oakland Raiders tonight at the Linc, no NFL team will be happier to see 2017 end than the Silver and Black.

Jack Del Rio, Derek Carr (above) and Co. clung to playoff chances of less than 1% entering Week 16, according to FiveThirtyEight, though neither the Raiders’ head coach nor quarterback put too much stock in that minuscule number. They needed eight results to go their way over the season’s final two weeks, two of which included wins over the Eagles and Chargers in a pair of away games.

Before the Raiders even kick off tonight, that fraction of a percentage turned to zero when the Chiefs beat the Dolphins yesterday. For the second year in a row, Christmas Eve delivered Oakland (6-8) coal in its stocking, last year in the form of Derek Carr’s broken leg and this year an official elimination from playoffs most expected before the season the Raiders would be a part of.

It’s a Christmas miracle the Raiders were still alive at two games below .500 heading into Week 16. Yet that’s what the mediocre AFC gifted Oakland this season, a gift it threw right in the trash with a subpar pass defense and lackluster quarterback play. There are questions surrounding the offensive coordinator and the head coach, one possibly locked in after signing a contract extension this offseason and the other seemingly on a scorching hot seat. Carr and Del Rio both vowed this week to play the final two games to win, no ifs, ands or buts about it. But these next two games are simply formalities before a season’s end that seems like it can’t come soon enough for one of the most disappointing teams in the NFL this season.

Last Sunday, cornerback Sean Smith resigned to the notion the Raiders were done after losing to the Cowboys. Del Rio said Wednesday his team wasn’t getting caught up in the fact it was still mathematically alive; they just wanted to play good football. Thought the Raiders weren’t officially eliminated until Sunday afternoon, it’s been several weeks since it felt they could realistically climb into serious playoff contention.

When Del Rio and his staff add them up at the end, wins won’t exceed losses. Wins might even be four fewer than losses. For a team some spoke in the same breath as New England before the season, it’s fair to classify them as a monumental underachiever in 2017.

The Raiders are 6-10 since Carr broke his leg in the 2016 regular season’s penultimate game. After No. 4 went down, Oakland lost to the Broncos in Week 17 and the Texans in the first round of the playoffs. Since that cruel Christmas Eve afternoon last year, Carr hasn’t looked the same for extended periods of time. He assures he feels no different, that he’s healthy, confident and improving every day, but a casual fan wouldn’t be wrong in sticking him at the middle of Oakland’s downfall.

0 thoughts on “IS THIS NOW A TRAP GAME? RAIDERS ELIMINATED BEFORE EAGLES GAME!”