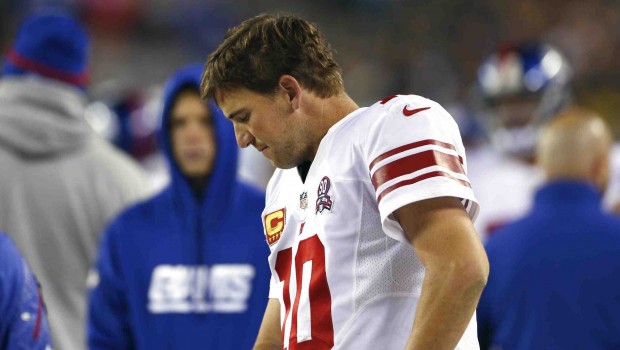 NOW THE EAGLES ARE LOOKING UP IN NFC EAST RACE TO 1-2 GIANTS!

Now the hapless 0-2 Eagles are looking up in the standings to the 1-2 New York Giants!

The Giants finally finished off an opponent when they defeated the Washington Redskins, 32-21, Thursday night to earn their first victory of the 2015 season.

New York became the first team in NFL history to hold fourth-quarter leads of at least 10 points in each of its first two games to start a season and lose both. After dropping those games against the Dallas Cowboys and Atlanta Falcons, criticism started to swirl around the franchise for the way it mismanaged games in the last period.

But with Thursday night’s victory – and the general slow start in the NFC East that includes devastating injuries to the Cowboys and uninspired play from the Eagles – the Giants (1-2) took a solid first step toward competing in the division with more than plenty of football left.

Eli Manning (above) completed 23 of 32 passes for 279 yards and two touchdowns, which put him 12th on the all-time passing touchdowns list above Dave Krieg with 263.

For Washington (1-2), dismal quarterback play from Kirk Cousins and an abundance of penalties, turnovers and miscues doomed their hopes of leaving New York with a winning record.