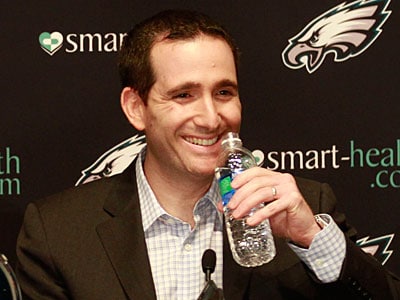 So, Howie Boy Roseman, who has whiffed on more draft choices as Eagles GM than he has connected with, is now on the clock:

If he doesn’t significantly upgrade the Birds in April’s NFL draft, even trust-funder owner Jeff Lurie will have to notice and send him packing.

But they need serious help at wide receiver and cornerback, get more help with their pass rush, add to their linebacking and defensive line depth and figure out what they’re doing at running back.

This journey will take time, Roseman, now the executive vice president of football operations, cautioned on Wednesday. There’s no quick fix for the damage that has been done by years of dysfunction.

So if the Eagles should go 7-9 again next season, missing the playoffs for a fourth straight year and six of the last seven, it will be no time to panic or give up on the plan.

What Roseman can do in this offseason is get Wentz some receiving weapons so the offense can be more of a threat to opponents next year and actually finish off long drives with touchdowns instead of field goals or turnovers.

He needs to be aggressive in free agency as well as the draft. No more bargain-basement, low-risk gambles such as Rueben Randle, Chris Givens and Miles Austin. None of these guys ever pay off anyway.

You know what makes Jeffery so appealing? It’s not his great size (6-3, 230), or speed or scary playmaking ability (15.0 yards per catch for his career). It’s his dependability. According to Pro Football Focus, Jeffery dropped just 14 passes total in his first four seasons in the NFL.

Bringing DeSean Jackson back would not be the way to go here. No way should they commit the kind of big money it’s going to take to sign him to a speed receiver north of 30 years old. At best, Jackson would be exactly the kind of “Band-Aid” Roseman talked about so much on Wednesday, the kind of thing they’re trying to avoid. By the time this team would be ready to seriously contend, Jackson will either be out of the game or complaining again that he doesn’t get the ball enough and/or that he’s underpaid.

Then, because there’s so much cornerback depth throughout the first three rounds, they need to atone for the sins of their past and not worry that they just used a first-round pick on Nelson Agholor two years ago. They need to turn around and draft a wide receiver again.

Mike Williams of Clemson would be a good candidate. Even though he represents an immediate need, he would be a great value pick too, if he’s still on the board at 14 or 15. (The Eagles will have one of those after a coin flip at the Scouting Combine breaks the tie with Indianapolis.)

Corey Davis of Western Michigan would be an excellent alternative if Williams is unavailable. Like Williams, Davis is 6-3 and can get open deep.

Repeat, he can get open deep.

Imagine the Eagles with Jeffery and Williams along with Jordan Matthews, Zach Ertz, Trey Burton and Darren Sproles next year. Now you might actually have a real good passing game to go to when you abandon the run so early, which Pederson does like clockwork.

This brings us to running back. No need to necessarily invest heavily here. If someone jumps out in the second or third round of the draft, fine. But considering Pederson’s committee approach to the position, the Eagles have plenty on the roster already in Sproles, Wendell Smallwood, Kenjon Barner, Byron Marshall and Terrell Watson.

This doesn’t even include top back Ryan Mathews, who’s presumably gone unless the market dictates the Eagles can re-sign him at a reasonable price after letting him go or renegotiate the non-guaranteed money on the contract he has now.

In the middle rounds of the draft, they can continue to build depth on their offensive line. Remember, they were able to get Seumalo and Vaitai with the 79th and 164th overall picks, respectively. And this was with Roseman running the show too.

They might even consider drafting another quarterback if a value pick who can be developed jumps out at them in the mid to late rounds. Remember, the Cowboys’ Dak Prescott was taken at 135 last year.

There’s no reason why the Eagles can’t come out of free agency and the draft with two excellent wide receivers, at least one solid starting cornerback, another offensive lineman or two in the mold of Seumalo or Vaitai and at least two valuable depth players at other positions.

If they can just punch the ball into the end zone a little more in 2017, they should be fine, even if their defense may be understaffed. This is because the payoff for controlling the ball, which they already do better than anyone, will be so much greater.

Either way, don’t count on them being able to make a true Super Bowl push until the 2018 season at the earliest. That’s just reality.