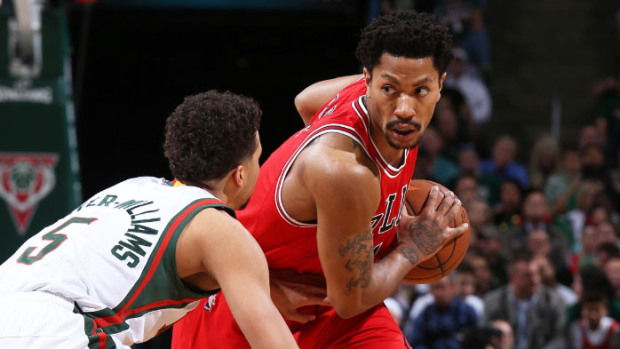 NOW HERE’S A RUMORED SIXERS TRADE WE CAN GET BEHIND!

Bill Simmons wants the Sixers to trade Jahlil Okafor to his fave Celtics for the right to the No. 3 pick in the June 23 draft.

We say no f-ing way!

But here’s a rumor that we can endorse, courtesy of Mike Missanelli at Philly mag:

Trading 6′ 11″ center Nerlens Noel to the Chicago Bulls for the following package: point-guard Derrick Rose (above), bench players Taj Gibson and Mike Dunleavy, and the Bulls No. 14 pick in the upcoming draft.

Surprisingly, there was much opposition to this trade on sports radio, which I cannot understand. Rose has his issues – he’s an older player now who has suffered through a variety of injuries; he may be brittle, he commands the ball on every possession, which may conflict with Simmons; he’s in the last year of a contract that pays him considerable monies. But damn, think of the excitement he would bring immediately to the Wells Fargo Center. Imagine a team with D-Rose, Simmons, Jahlil Okafor, Joel Embiid, and Dario Saric. Now you are putting talent on the team. And Rose did play 66 games last year. I would do that deal in a heartbeat.