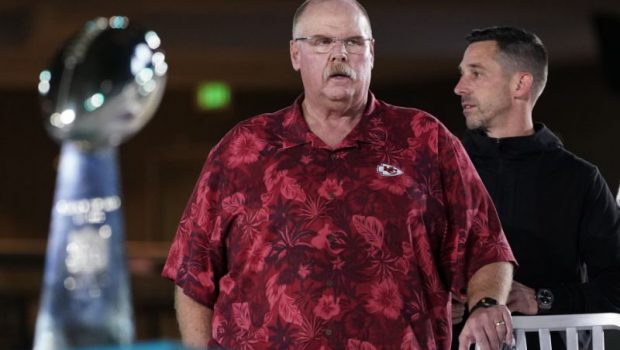 Disappointed Eagles fans will have to settle this Sunday for rooting for their former coach Andy Reid, who took the Birds to the Super Bowl 15 years ago.

“I like dress codes,” Reid said with a laugh. “As long as it’s part Tommy Bahama.”

He was asked about his ideal hamburger, and while he never divulged the details, he was quickly discussing double cheeseburgers. Last week, he noted he probably needed to go on a diet.

This is Reid’s 21st season as an NFL head coach and it’s fair to say the public has never seen the man as open, perhaps even as relaxed, as he is now. Maybe it’s appreciating the stage at age 61 and 15 years removed from his last trip here. Or maybe it’s just not being afraid to show some personality.

Whatever it is, this is a Super Bowl where Reid, the NFL’s best coach to never win it all, is enjoying a long-awaited coming out party. He’s no longer just a big, gruff coach. He has become easy to root for. He’s a sentimental favorite.

That’s true even back in Philly, where over 14 seasons he took the Eagles to five NFC championship games but only won one — and then got beat by New England in the Super Bowl.

No one denies he is a good coach, but clock management disasters and big-game errors, infuriated and frustrated the fans.

Now, however, even WIP, the aggressive sports talk station in Philly which spent untold hours torching Reid, is on his bandwagon.

The station will hold “Andy Reid Appreciation Day” tomorrow, including lots of former players as guests.

Reid could only smile at it all.

“It’s almost a badge of honor when you get booed there so I understand how that works,” Reid said. “I loved my time in Philadelphia and my family did. I have great memories of Philadelphia … If you can withstand the pressure of Philadelphia you become a Philadelphian. So I take a lot of pride in that.”

Rather than carry that weight around on his shoulders this week, he looks and sounds loose. His media appearances aren’t the matter of fact sessions that seemed to dominate the previous Super Bowl. He’s cracking jokes, teasing himself and smiling a lot.

Maybe having Patrick Mahomes will do that for you. Or maybe it’s just perspective.

“Well, I’m older, right?” Reid said. “I’ve probably seen more than I saw before. It’s been 15 years since the last Super Bowl I’ve been a coach in. I don’t know if ‘relaxed’ is the right thing, but I’ve kind of walked in this path before, so I know what to expect for the most part.”

Reid is an excellent football coach. He has delivered 15 playoff appearances in those 21 seasons. He has built up the programs in both Philly and K.C. He remains an innovative offensive mind. He’s not afraid of daring personnel decisions (bringing back Michael Vick, moving up to draft Mahomes).

Coaches rave about him and his friends swear that what everyone is seeing now is the real Andy, this funny, spirited guy who doesn’t take himself too seriously. His players desperately want to win a Super Bowl for him, if only to put the final accomplishment to rest.

“It would mean a ton,” Mahome said. “With how much success he’s had? Every single year he puts out a good team. His work ethic and the way he is able to go in every day and grind is incredible.”

Reid generally stays the course. The near-misses have been painful. They always are. Yet a coach who keeps getting his team there, year after year, is probably superior to the one-hit wonder.

Yes, he understood why Philly fans tired of him. He didn’t even care. In the end, parting ways proved a blessing for all. The Eagles went on to win the Super Bowl in 2018 under Doug Pederson.

“My guys, the football players and coaches, my heart went out to them for the great job they did,” Reid said, sounding 100 percent sincere.

Meanwhile, Reid has continued to flourish in Kansas City, with seven consecutive winning seasons and now needing just a victory over San Francisco to win the franchise’s first Super Bowl in half a century.

Even in Philly they agree. The man they once booed and grew tired of, they’ll now celebrate and appreciate.

Only one thing will make Reid’s week, a victory on Sunday. The run-up, however, seems to be a lot more fun this time.