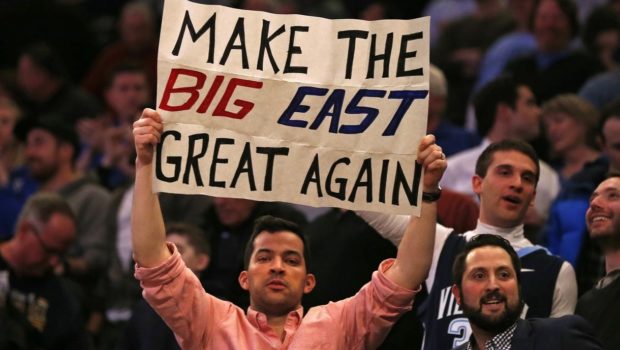 Villanova basketball coach Jay Wright still held out a sliver of hope that the Big East conference he admired since its inception in 1979 might somehow stay together.

In 2010, the league was filled with talented players, colorful coaches, and schools that loved nothing more than to beat one another on the court.

But after three decades of flourishing it was on the verge of breaking up amid broader NCAA conference realignments. The fault line was football, and a fissure opened between the schools that had major programs and those that did not.

They knew the college athletics landscape was rapidly changing, and they knew that they weren’t necessarily all that powerful—football and television money ruled this world now, not basketball.

And so, soon enough, Syracuse, Pittsburgh, Notre Dame, and Louisville joined the ACC; West Virginia left for the Big 12; and Rutgers departed for the Big Ten.

In 2013, what was left of the Big East split in two. The schools with major football programs formed the American Athletic Conference. The remaining seven schools kept the Big East name and relaunched as a basketball-centric conference with ten members, adding Creighton, Xavier, and Butler to the fold.

Back then, the conventional thinking was that the so-called Power 5 conferences (ACC, Big Ten, Big 12, Pac-12, and SEC) would dominate on the field and earn big-money television deals that smaller leagues like the Big East couldn’t match. That prediction has mostly been borne out.

And yet, a funny thing has happened. The new Big East hasn’t lost its relevance. The league might not be as formidable as the old Big East or garner as much national attention, but it has remained a major force in college basketball.

Last Sunday, seven Big East teams were selected for the NCAA tournament, including the top overall seed and reigning champion in Villanova. Only the ACC has more bids, with 10 teams in the 68-team field. The Big Ten also has seven teams in the tournament.

Since the new Big East was formed, the ACC (28 bids), Big 12 (27), and Big Ten (27) are the only leagues with more teams in the NCAA tournament than the Big East’s 22—and the ACC and Big Ten both have more member schools.

The Big East’s success has been a pleasant surprise to Wright, who recalls having woe-is-us discussions with Georgetown coach John Thompson III when the original league dissolved.

“We were distraught,” Wright said. “When it broke up, John and I were crushed. We were never in favor of that.”

And yet, looking back, Wright believes the league has adapted about as well as could be expected. He’s happy to see his initial pessimism proven wrong.

“You know what I think we learned?” Wright said. “All this breakup was about football. It was all about football, and rightfully so. They make tons of money. They all went and committed to football. We’re not in that world. We said, ‘We tried to hang, we tried to hang, now we’re basketball. Let’s just go commit to basketball like they commit to football, and let’s see what happens.’

“The blue bloods are still the bloods—Duke and Kentucky and Carolina,” Wright said. “But the reason they are is because they’re committed to basketball. They don’t have great football teams. They’re committed to basketball. And that’s what we all are. All those guys and us, the Big East teams, that’s what’s starting to come out of this football thing, which I never thought of.”

Wright has a good reason to be happy about how things have worked out. Villanova has won each of the four Big East regular-season titles since the league began and captured two Big East tournament titles during that span. Although the Wildcats have dominated the league, the Big East also has depth; Butler, Creighton, Marquette, Providence, Seton Hall, and Xavier all made the NCAA tournament field this season.

Even with the ACC tournament eight miles away, the Big East had sellouts for Friday night’s semifinals and Saturday night’s championship game between Villanova and Creighton. The Big East’s contract with Madison Square Garden runs through 2026, and the league hopes to continue the partnership for as long as possible. The tournament in the world’s most famous arena has always been one of the conference’s big selling points, and a way to link the old and new Big East.

After Villanova won the Big East tournament title over the Bluejays Saturday night, Wright stood in front of the Wildcats’ locker room and got a bit nostalgic. When Wright runs into Pitino, Huggins, and other former Big East coaches, they still reminisce about the times coaching against each other at the Garden and elsewhere.

“When we see each other, we all say we miss the good old days,” Wright said. “We all say it. They’re all having great success. This is a great league, but it’s completely different than that was.”

For the most part, Wright and the rest of the Villanova team had a business-like approach to Saturday’s victory and spoke about how their main goal lay ahead. The Wildcats are seeking to become the first team since Florida in 2006 and 2007 to win consecutive national championships. Wright, though, took a moment to savor winning another Big East title.